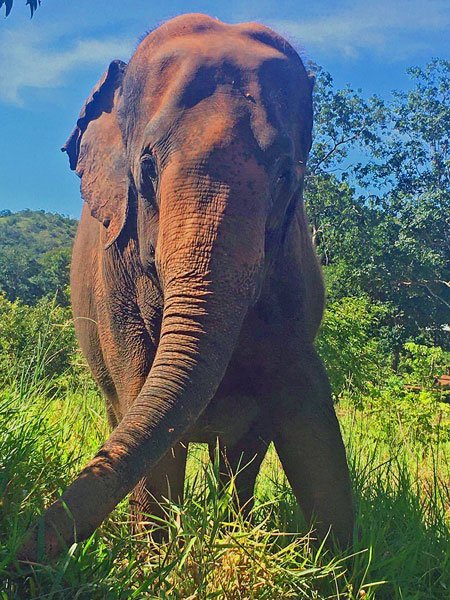 All of our girls get regular footwork, just not necessarily frequent footwork. We look at their feet daily, and if an issue pops up, it’s immediately taken care of. But for the most part, their feet generally look really good.

Maia’s footwork is the most infrequent. She uses her feet to dig in the mud, cut grass, and she walks all over, which does most of the work for us. Combined with her hours spent in the pond each day (which keeps them soft), she only needs minimal foot trimming about every 4-6 months.

Rana’s left elbow is fused (doesn’t bend), so she walks with a bit of an uneven step. Her gait causes her front feet to wear differently. She does sometimes bend the wrist (just not the elbow), so her toenails still wear on both sides, but we need to make sure they are balanced.

Rana’s footwork happens every few months. Like Maia, she has already been trained for footwork and knows what to expect, so she tends to fall back into the routine pretty quickly. During her normal treatments (even when we aren’t doing footwork), we periodically ask her to present her feet. Trained behaviors for footwork are like riding a bike, or a dog who has learned to sit – once you know, you know, but it’s still good to practice every few weeks to make sure. ? This also allows us to visually inspect the underside of her feet to determine when work needs to be done and to keep an eye out for any potential issues.

When we first started this round of footwork, Rana did great, especially considering how lazy she was that first morning. She usually gets normal-sized food rewards when she presents her feet for inspection. That morning, she caught on fairly quickly that she was getting extra-large treats and was more than happy to play along as we did some trimming and filing.

We’ve been doing a “tune-up” every few days, and, overall, Rana is great with her quarterly footwork. Earlier this week, when she was super sleepy, she went out of her way to put her foot entirely over and through a higher bottom gate bar without being asked. Yet, five minutes later, she decided she was too sleepy to swing around to stand parallel to the fence for her tick check… Let’s just say it’s fairly obvious Rana knows which behavior earns her better treats. We still find it hilarious that she always has enough energy for the harder behaviors than the easier ones. They’re so cooperative, even when they aren’t.

Your ticket for the: Maia and Rana’s Footwork Routines