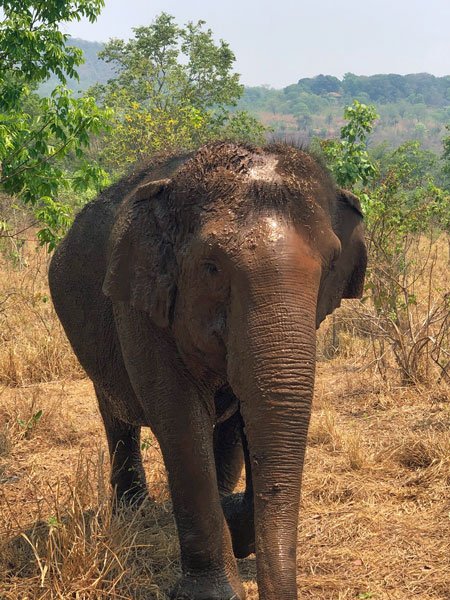 With everything that has gone on lately, one of our mini elephant introductions slipped through the cracks. Maia was the first elephant to be introduced to Bambi without a barrier between them. Although Maia is generally not the first elephant we would do this with, we try to allow the girls to be the ones who choose. Maia was the first elephant to meet Bambi through the fence, and all of their interactions were gentle and positive. Since Mara and Rana were still at the back of Yard 4, spending their time in the pond, we allowed Maia and Bambi to share a yard one morning after breakfast.

Bambi was already in Yard 1, and we let Maia into the yard with her. True to herself, Maia went over to the first pile of hay she saw and didn’t pay Bambi much attention. Bambi, on the other hand, was excited to see another elephant in her space and bounded over. With their interactions through the fence, Bambi did what is considered proper etiquette for when new elephants meet- she backed up to her, was slow and patient to allow for initial touches and smells. This morning Bambi forgot all of her elephant manners and rushed right up and put her face in Maia’s face as she was eating. Not surprisingly, Maia wasn’t thrilled and gave her a little head nudge to let her know. Bambi seemed a little surprised, possibly because all of their other interactions had gone so well up until that point. She did back away a bit, but only gave it a minute before trying to approach again. Maia’s response was the same, and this time Bambi responded by leaving and giving it a few minutes. Bambi tried to approach once more, this time by backing up, but still not respecting Maia being in the middle of eating and the tone that had already been set. Bambi was once again met with a gentle ‘not now’, and this time Bambi walked off and went into Yard 5.

While this may not be the introduction people would dream of, it’s also not completely negative. First, Bambi has to learn proper elephant behavior if she is to be part of a herd. What went on between Maia and Bambi is something we have seen with other elephants before, and will most likely see again. Some elephants initially approach in a very reserved manner because of their insecurities, while others approach full steam ahead because of their excitement to be with another elephant. The latter would be similar to a stranger running up and hugging a person they don’t know. Some people would tolerate it, others would push the person away, and some would have a much stronger reaction. The ‘mistake’ was Bambi’s, but it is because of all of her years alone, and then a poor introduction and tumultuous relationship with Maison at the zoo.

For those of you who have been following GSE for a while, you will remember that Maia and Guida pushed Rana away for a very similar reason. Rana was super clingy, wanted to be close all of the time, to the point where she wouldn’t let either lie down to sleep during the day. Maia and Guida sent clear messages to Rana that she needed to tone it down, but, at the time, Rana had a hard time taking it down a notch. As a result, Rana ended up going off on her own, which many supporters found sad to watch. But during this time, she realized that being a herd member meant putting your own desires to the side and trying to be what the other elephants need instead. The phenomenally supportive elephant that Rana is today grew out of that experience. But it took a not so great experience and time for her to get there.

The other positive was that Bambi didn’t run away and instead was able to see that she could safely leave the situation on her own. Maia didn’t chase or follow her; she simply continued to eat. This gave Bambi some time to think and decide if she felt secure enough to come back or if she needed some time alone. She did come back on her own that afternoon, but by then, Maia had finished her snacks and moved on to Yard 4. That afternoon Mara and Rana came back, and we ended up with a lot more to talk about with that interaction. We only realized we never discussed Maia and Bambi when I (Kat) made a passing comment to Suz about it, and she mentioned she didn’t know about it, that we had never said anything.

So yes, the two did spend time together already, and we’ll try it again soon. This morning they were being gentle and touching at the fence again- we were watching on the cameras before going down. Hopefully, next time they share space, Bambi will remember her last encounter, consider the scenario, and try a different approach. It’s all part of the growth that happens at the sanctuary. 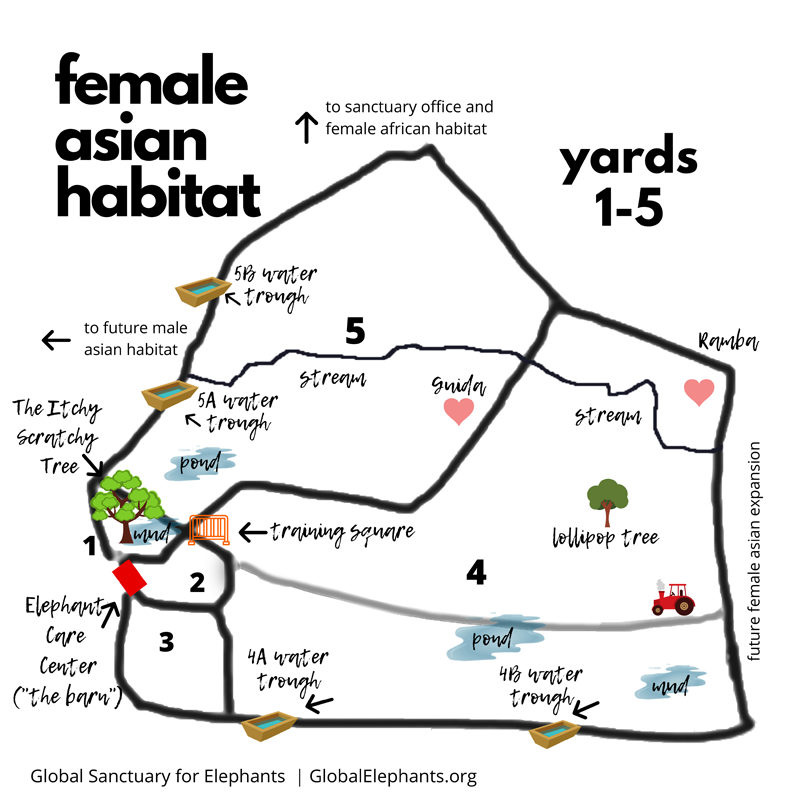 Your ticket for the: Maia and Bambi’s Barrier-Free Introduction