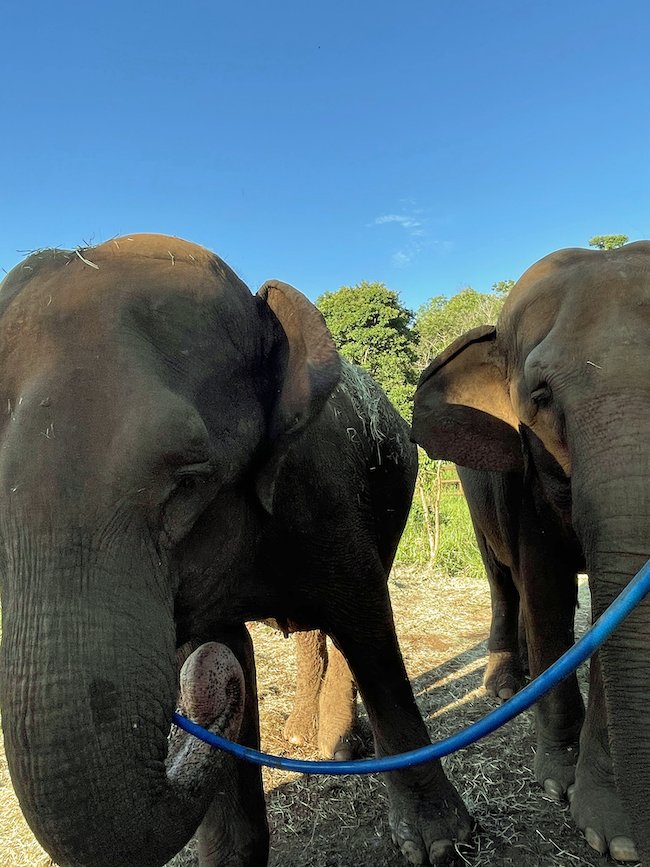 Mara is an absolute character. We have a spring-fed creek and several water troughs available throughout the habitat for the elephants to drink from. Rana prefers drinking out the troughs (which are emptied, scrubbed, and refilled daily). Maia and Lady are also fine drinking from the troughs, but Bambi and Mara both seem to prefer drinking from the hose when someone is  available to serve them.

We use reserve water tanks for water at the barn, and we keep two 5,000 litre tanks hooked up at all times. The empty tanks are switched to full ones as they run down, and we refill the empty ones from our natural springs. The system works great, and there is always plenty of available water in reserve. We recently had to shut off the main supply line for a few hours for a minor repair, which happens occasionally. After the work was completed, the maintenance team needed to allow the repairs time to dry, and ended up not opening the line back up.

There was still water in the tanks, so the issue went unnoticed until the next day. Scott headed out to feed the girls and once they were done eating, went to offer Mara and Bambi their usual water from the hose… but no water came out. Mara offered a tentative squeak, asking politely for a drink.

It took Scott a minute to realize what happened. For the humans, this wasn’t a significant issue. It only takes a moment for someone to run up the hill and switch the water back on, but pampered Miss Mara prefers immediate service.

Again, she made her signature squeak, requesting the water. When she didn’t immediately receive it, she squeaked again. And again. She then began to squeak continuously, getting louder and louder with each moment that water did not come out of the hose.

Her squeaks usually are cute and endearing, but this time they escalated until it felt more like a yell. She seems to think that the louder and more demanding she is, the more likely she will get what she wants.

Unfortunately, that’s not how things work. Once the water was again running through the lines and to the habitat, we gave Mara the drink she had been so urgently requesting.

Photo of Mara (left) enjoying a drink from the hose, while Bambi waits for her turn

Your ticket for the: Listen Up – Mara Wants Her Water Now