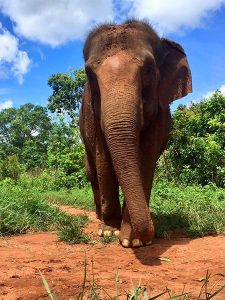 At night, elephants have a different energy about them. It’s hard to explain, but it feels like a special time somehow. They are calm, quiet, and relaxed. Even when they are having a late-night party, they still have an aura of peace that we can’t quite describe.

Mara’s appetite continues to be intermittent, but she generally eats best at night. Each night at around 10:00 p.m. GMT-4 (8:00 p.m. CST), we give her, and any elephant near her, late-night snacks. One recent night, Scott headed out to do the night feed and initially couldn’t find anybody. It wasn’t just that he couldn’t find Mara; he couldn’t find a single elephant. We don’t know if they were happily grazing quietly in remote locations or if everyone was napping. Eventually, he came across Mara, who appeared to be en route to the pond.

He tossed her a few small snacks and began leading her to the nearby water trough. With her decreased appetite and undiagnosed health issue, we are focusing on ensuring she stays hydrated. Scott wanted to bring her there to offer her the water hose to encourage her to drink. Scott arrived at the water trough several minutes before Mara and patiently waited outside the fence. It was night, so it was a little hard to see.

Scott saw an elephant coming but quickly realized it was Maia, strutting up from Lollipop Tree. She was going at full Maia speed with big eyes and significant energy. A few minutes later, Mara popped up behind Maia. At the same moment, Rana came from the other direction. All three elephants converged on the water trough at roughly the same time, which is cause for a big party.

There were lots of vocalizations, trumpeting, and Mara squeaks. It was a little challenging to give Mara her extra food because Maia wanted to be a big part of everything, especially Mara’s food. Scott ultimately walked Maia down the fence a bit and gave her a pile of food. Mara quickly settled down and ate well. Once Mara was done eating, Scott headed out, leaving the three girls to resume their late-night friendship party.

Your ticket for the: Late-Night Friendship Party