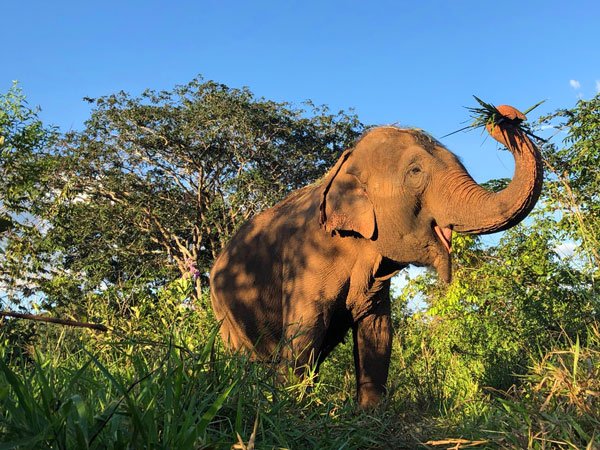 Lady is a strong elephant, both physically and emotionally. Her feet have been in terrible condition for a long time, yet she pushes through it. This is something we have seen in other elephants as well, but it always takes us back a bit. Through a lifetime of being in the circus, she has endured a tremendous amount, the impact it had on her is undeniable, but she is still determined to try and heal her spirit.

Trusting us with her feet is an enormous step. She has undoubtedly been hurt before, her feet are painful, and allowing us to do anything with them is incredibly vulnerable for her. The first day it did seem like she was willing to give us the benefit of the doubt but was still watchful and unsure of how things would play out. She appeared to be on the fence and was ready to back away if she perceived that we did anything wrong. After making it through the first session without any errors on our part, Lady’s trust seemed to widen. With that little opening in her protective armor, something else emerged, neediness.

Vulnerability is one of the most challenging qualities to embrace, especially when you have spent a lifetime having to be tough to survive. During a session on her back feet, she reached out in a way that wasn’t looking for food but was looking for a hand. She wanted support, and it showed in her eyes as well. It was the first time we have seen her admit to needing anyone; it was beautiful and heartbreaking at the same time. It’s generally through an elephant’s healing that you understand how emotionally scarred they are. Recognizing that first moment of need was a reminder of how protected she had become of herself and how hard it was for her to allow herself to need someone.

Lady has a ‘tell.’ If you have seen any of our training videos or photos, you will see we hold the end of their trunk during procedures. It helps us to be connected to them, keeps them grounded, and allows us to feel where they are at. While holding Lady’s nose, if something hurts, if she gets scared, or is starting to get tired, she will close the one side of her nose a bit, holding your pinkie a little tighter. It’s not a hard grasp or anything aggressive; it’s almost like when someone holds your hand just a little tighter. Both Scott and I have experienced the same thing; it’s almost hard to notice, but the meaning is very clear. When you listen to the ‘little’ communications, it often opens them up to bigger ones, and Lady reaching out was significant for her.

When we work on Lady’s front feet, Scott stays down at her foot, while I stand to be eye level with her, trunk in my hand. We have mentioned before how Lady wants you to be present when you are with her, and if you’re not, she finds a way to let you know. With footwork, she wants you to be right there with her, looking directly at her, connected. Guida was very similar. Guida’s need for it wasn’t as strong, but she preferred to be eye to eye as if the connection made her feel safe. We would joke she had to look into your soul; her presence was commanding. But the same behavior in two different elephants feels incredibly different. Lady seems more to need, almost demand it. This may shift as well. As her general comfort grows, it could relax, or not, it could simply be what she wants.

After Lady arrived, we saw a shift in her understanding that she didn’t have to lash out to express her discomfort. She learned that we would listen to the small things, and she could avoid the big statements. Now she is starting to learn that not only can she communicate displeasure, but she can open herself up to other emotions as well. It is a complicated journey and requires a lot of work on her end. We are thrilled to see that she is beginning to feel safe with allowing herself to feel and sharing those feelings with others.

Next post, we’ll talk about the actual condition of her feet.

Your ticket for the: Lady’s Steps of Hope Part III: Emotions