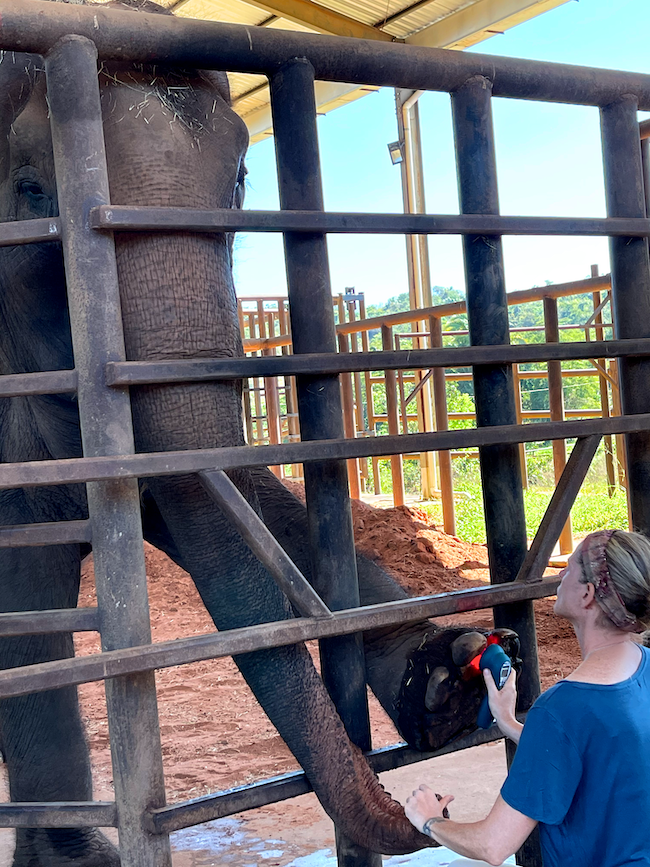 Many of you know of Lady’s foot troubles, but for those who don’t, we thought it would be helpful to share some information about what she faces daily and a little bit about some of the treatments we currently use to ease her discomfort.

In the wild, elephants are constantly on the move and can walk up to 18 hours per day. That means that their foot pads experience organic wear because they come into contact with the earth, grasses, rocks, and other natural surfaces.

When Lady came to Elephant Sanctuary Brazil, we saw significant swelling and infection that originated years ago. We were aware of the issue before her arrival and believed that sanctuary was the best option for her to receive proper care for her feet. They will never be fully healed, as she most likely suffers from osteomyelitis and has internal infections that expose themselves with normal pad wear. We don’t know how deep they are and she has had “blowouts” of infection that her feet cannot contain. We try to find the right balance between opening up infected areas to air and exposing so much that she can’t put weight on her feet. Some facilities have sedated elephants and attempted to treat foot infections using more invasive techniques. This is generally not successful and has led to elephants being euthanized.

On most days, Lady still gets her daily foot soaks and treatments; she is generally good about getting them, but occasionally has other plans. Until now, she has only experienced significant problems primarily in her right front foot, but recently her left front foot has flared up and needs additional attention. Due to discomfort in both front feet, we have started her on the same pain medication that Mara gets for her gastrointestinal issues. Right now, we are monitoring her closely to see how she responds to it because, just like with humans, pain medication can have a range of side effects on elephants. It is a gentle medication and she is on a low dose at the moment, which can be increased if needed. Lady is a stoic individual who doesn’t let her physical limitations  control her life, but we have to acknowledge and address the impact they do have on her.

Your ticket for the: Lady’s Ongoing Foot Problems and Treatment Updates