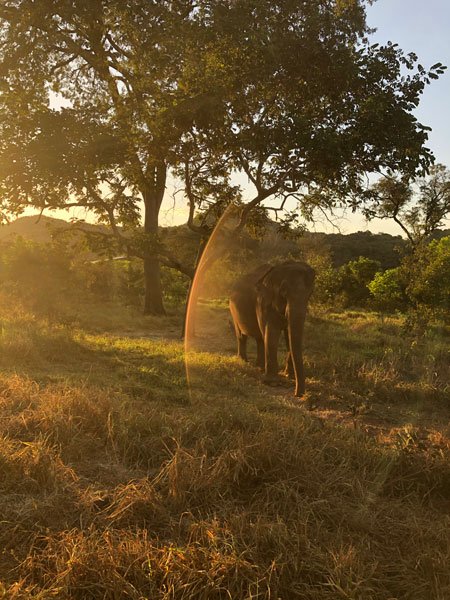 This is a photo that Scott took of Lady on her way to dinner last night. We have taken A LOT of elephant photos over the past decades, and this is a first. Scott loves the picture and talked about Lady having a forcefield around her.

Last night, in a dream, I was looking for a necklace for my sister and was brought to the side and shown one that was of a rising phoenix. The chain looked like inch-wide fabric but was woven metal that was completely smooth. Its beauty was breathtaking: the colors were gorgeous, it was crafted meticulously, and the texture was like silk. The Native American man who had made it said they don’t allow people to touch this special piece because of the energy people put into it. Then he laid it in my hands so I could hold it. I woke up shortly after, and Lady was my immediate thought.

We often have concerns over Lady and look at much of what she does with somewhat of an analytical eye. It’s part of our job. We have to gauge her comfort and decide how to move forward, what to change, what needs to be addressed. But we also look at her through loving and empathetic eyes. She has had a harder time than some with trust and confidence and needs extra support at times. These two things (the photo and the dream) helped serve as a reminder to Scott and myself that no matter what happens, Lady is good. There is an undeniable inner strength there. After all she has been through, she has risen up and moved forward with grace, where many beings would have faltered. Her resilience is astounding, and although it can be habitual to look at her with concern, she is tougher than all of us put together.

Sometimes the world sends you reminders when you need them, and we’ll take this as one of them. Although some people may not understand this post at all (and that’s ok), we also feel there are some supporters out there who may also appreciate the reminder that Lady, against all odds, is flourishing at the sanctuary. It may be in her own way and on her own terms (the gift of autonomy), but she is stellar.

The photo is a little dark, but we wanted to be able to say it is unedited. ❤️

Your ticket for the: Lady’s Force Field