Lady With Some Pep in Her Step

This video is from yesterday. Lady had her own little party just before it was time for foot care. She was joyously trumpeting and kicking around in the bushes, but like many elephants, as soon as you turn on a camera, they stop. We decided to share the video anyway because of her walk. For those who have followed since Lady’s rescue, you are familiar with her very slow speed, drastic head swing when she walks, and deliberate steps. This clip shows the improvement in her stride, which is indicative of her increased comfort. Besides, she’s cute all spunky and tail half out from being silly.

That being said, it looks like Lady’s front left foot is having a blowout- when an internal abscess comes through the surface of the skin. As we have mentioned before, Lady’s feet will never be ‘normal’ and will require life-long care. She most likely suffers from years old, deep infections within her feet that no one in the elephant world has found a way to cure. We can care for her feet, minimize these occurrences, and improve their condition, but elephants with feet like hers tend to have blowouts cyclically. Right now, it’s just a tiny little spot above her nail that we noticed while doing footwork. Dealing with it early is helpful, but many times it gets worse, no matter the treatment protocol, before it gets better. It doesn’t seem to bother her much at this point, but it has meant that we restricted her to the first three yards so we can ensure that she is here for her foot soaks daily. We can and do treatments at the training walls in the habitat, but we can’t do her soaks out there. Those have to be done at the barn. There are plans to build a treatment stall at the back of yard four so that more in-depth treatment and soaks can be done out in the habitat, but since we are a small team, that project has yet to be completed. Lady seems good with being close to the barn. Since she was out exploring before this, the yards are of interest again, and with the other girls coming back, it makes each day different.

We mentioned yesterday that Mara, Rana, and Maia were all in four yesterday, but initially, Maia stayed close to Lady (see photo below).   Maia was getting her tick check/look over at the fence, and Lady decided to come over. She’s a smart girl, and she knows that means food rewards. Although she may have initially come to investigate, she stayed, and the two spent some time together before Maia headed down by the other two girls. Today, Mara, Rana, and Lady are all in yards 1, 2 & 3, so everyone gets some time together to socialize. Lady doesn’t seem quite as interested in Mara and Rana as she was last week, but she’s also not running away. All three girls are currently in yard two but not right next to each other.

Thank you to everyone who gave towards Lady’s foot care fundraiser. We had to reorder several of her sprays and soaks this week and it brought a smile to our face thinking about how many people came together to make sure she has everything she needs. 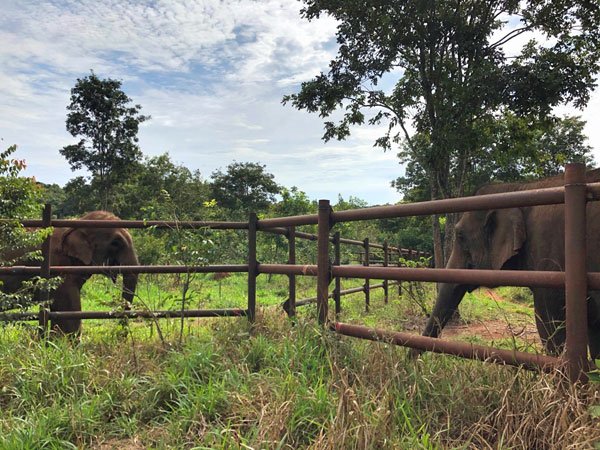 Lady on the left. Maia on the right.

Your ticket for the: Lady With Some Pep in Her Step

Lady With Some Pep in Her Step