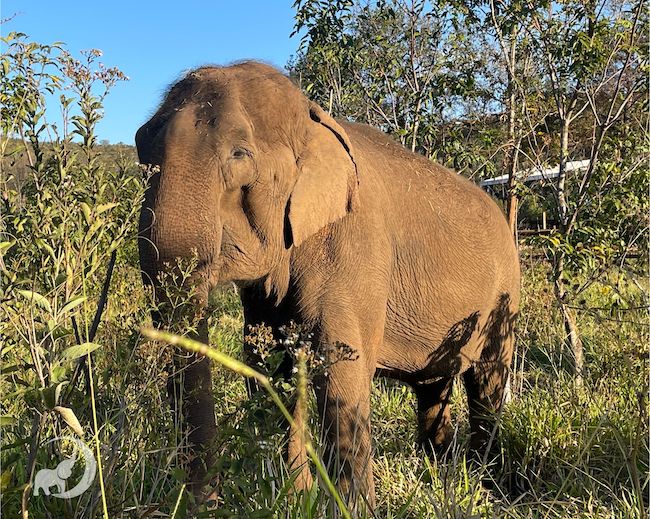 During night feed recently, Kat checked on Lady, who was doing everything she could to make herself seen. Lady was standing parallel to the fence with her trunk over the top and her mouth open to show that she was awake and definitely wanted snacks. Kat generally doesn’t get too close to Lady’s area in the evenings since, if she’s sleeping, the last thing Kat wants to do is wake her and cause her to stand up; her feet benefit from any time she is lying down and her weight is off of them. But, after seeing that Lady was very much awake, Kat got some hay and produce for a nighttime treat.

After giving Lady some food, Kat took some time to say hello and spend a few minutes with her. Depending on the elephant and the situation, your interaction may change or the length of time you spend with them may differ; if elephants are off doing their own thing, you certainly aren’t going to stop them for a personal interaction. But in situations like this, where the elephant is clearly open to one-on-one time, it’s appropriate to offer some affection – even if that just means saying hello and staying for a minute or two.

Lady gave Kat her trunk and Kat was petting her trunk and talking to her. Lady put her foot up on the fence as though she was expecting some foot treatments. Kat had to laugh, since it was 11pm and that wasn’t on her list of things to do. Lady happily rumbled and put her foot down. After a moment, Lady put her foot up again, causing Kat to laugh again. Lady rumbled in response and put her foot down once again. Kat promised Lady that she’d return the next day to look at her feet, just in case Lady wasn’t just being her charming self and really wanted them checked out – which Kat did. It’s just another example of how Lady isn’t necessarily subtle when it comes to wanting attention – and food.

Photo of Lady grazing near the barn

Your ticket for the: Lady Makes Herself Seen