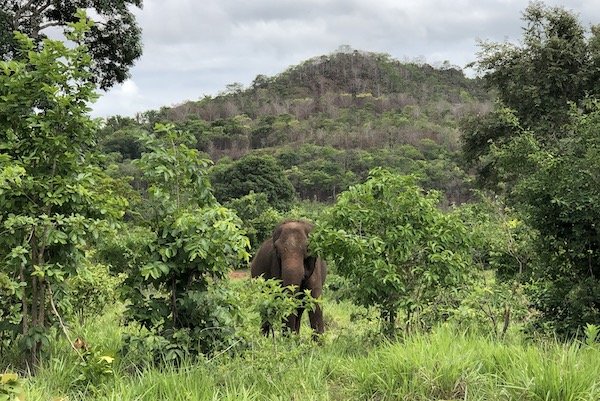 Rana and Mara were both in the pond one recent morning when we checked the cameras.  They were standing along the edge – with the water level up to their bellies, just splashing away.

When we went out to feed them breakfast, Rana was about ten yards from the fence, and Mara was dusting near the pond. We called Mara over, and she walked over to the water trough for a drink instead.  It ended up working out well because it provided a decent space between Mara and Rana for ease of making sure everyone ate their own breakfast.

Kat fed Rana and then Mara along the fence. When they are out in the habitat, we can’t physically separate Rana and Mara for meals as we can in the smaller yards.  To make sure Mara eats her own food (not Rana), someone stays with the two while they eat.  Kat remained with the two while Scott and Matteus went to look for Lady. Lady was most likely to be across the creek (where all the delicious grass is), so Scott and Matteus headed that way to look for her.

Once Mara finished her first breakfast, Kat started to put hay and piles of produce snacks around the pond for later.  Suddenly, Kat saw Lady nearby, pretty close to Rana.  Kat had to laugh as she called Scott and Matteus back on the walkie-talkie.   The two drove back to Kat and fed Lady along the fence a short distance from Rana.

We aren’t sure if Lady was on the other side of the pond waiting for her breakfast, gave up, and headed over to Kat to “inquire” about her meal.  She also may have been there the whole time, observing everything, and Kat was so focused on Mara’s eating that she didn’t notice Lady.  Nonetheless, Lady was speedy and spry when her breakfast finally showed up.
When we checked the cameras a little bit later, Mara and Rana were back in the pond bathing, and Lady wasn’t visible, wherever she was.

Your ticket for the: Lady in waiting