Lady and Her Naps 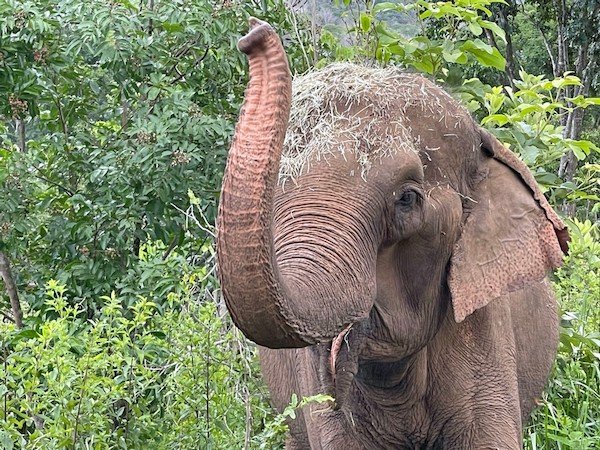 One recent morning, Lady was lying down upon initial arrival. Mateus was the first human at the barn, and even though he has been here for months, it’s the first time he has seen Lady lying down. We know she lays down frequently, but we don’t see her do so very often.

It’s good for all elephants to lay down to sleep. With the condition of Lady’s feet, it’s vital that she lie down regularly to take the weight off and give her feet a break.

One recent night, when we went to drop off food for her, Kat saw some movement in the bushes. She quickly realized it was Lady and waited to lay eyes on her. As Lady approached, Kat realized she looked exhausted. Kat jokingly told her she needed a nap. Once she got close, Kat realized that one side of her body was covered in wet spots and the other side was dry. That means Lady was lying down in the damp grass and had just stood up – which explains why she looked so sleepy; she was probably still half asleep!

Having wet spots is a clue as to when they’ve been lying down, but there are other ways we know too. Sometimes, we can also see elephant-imprints in the grass, or they’ll have dirt or other debris stuck to one side of them. We suspect – and hope – she laid back down after her snack that night.

Your ticket for the: Lady and Her Naps

Lady and Her Naps