credit for all photos on this page: Tomás Francisco Cuesta

Kuky is dominant over Pupy, but they get along fairly well. Pupy is curious and peaceful. Kuky is expressive and energetic.

Kuky has some GI troubles. Pupy has an issue with her back right ankle.

Both elephants are overweight and appear older than their years.

They both arrived together and were welcomed by a female Asian elephant named Norma, who adored them, but passed away in April of 1995. Mara arrived in November 1995.

Their Story From Zoo...

Kuky and Pupy, former enclosure mates with Mara, reside in what was once known as the Hindu Temple of Elephants in the Buenos Aires Ecoparque. According to records, the two arrived at the ecoparque together in 1993 from Kruger National Park in South Africa. There is no known reliable documentation on their date of birth, or if they are related, but both African elephants are believed to be in their 30s. Pupy and Kuky are deeply bonded. 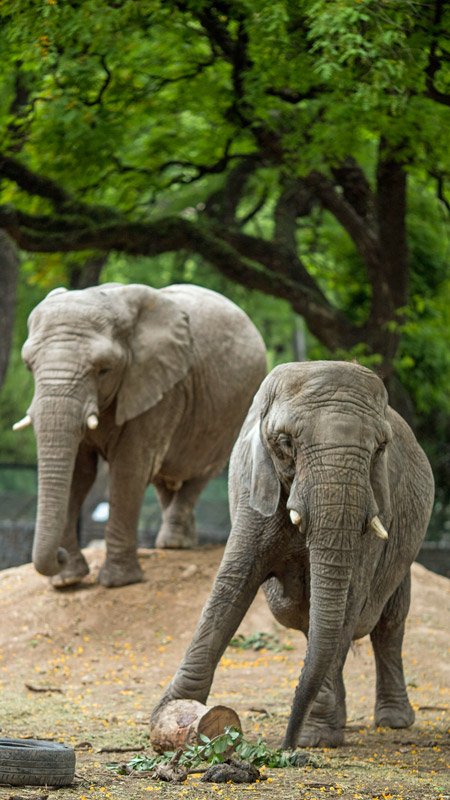 The two elephants, referred to by ecoparque staff as “the Queens,” will eventually share a space with Kenya, the female African elephant from Mendoza.

The girls are very curious about anything new in their environment. As with most African elephants, both have strong character.  Even so, we are told Kuky and Pupy are patient and calm during their veterinary check-ups at the ecoparque.  Though we’ve had limited interactions with the two, Kuky seems to be a bit more playful and perhaps slightly more dominant. However, on our last trip to the ecoparque, Pupy’s personality seemed to show more spark. It is difficult to know who they are, though we anticipate they will blossom at Elephant Sanctuary Brazil.

Kuky and Pupy love watermelon and, during the summer, the caregivers at the ecoparque make them fruit popsicles (fruit cut up into a bucket of water and frozen).  They also enjoy dry tree branches, bamboo, and Pupy especially loves grass hay.

We look forward to watching Kuky and Pupy transform after they make the journey to sanctuary.  We are working closely with the ecoparque, which supports their move to Elephant Sanctuary Brazil.  The open space, trees, and grass, will certainly provide them with many opportunities to grow and discover who they really are.

To Waiting for Sanctuary.

Phase 1 of their habitat is complete.
(they will share a space with Kenya)

How You Can Help Kuky and Pupy

Although Phase 1 of the African female elephant habitat is completed, in order for Kuky, Pupy and Kenya to truly heal and thrive we need to complete Phase 2 of the expansion.  This will add an additional 70 acres of fenced in land for them to explore as they choose – day or night.  Offering space is a crucial part of the healing process and while they will have space to investigate, offering more room to roam will only enhance the process.  You can help provide Kuky, Pupy, Kenya and elephants to come with room to roam by making a donation today.

Your ticket for the: Kuky and Pupy