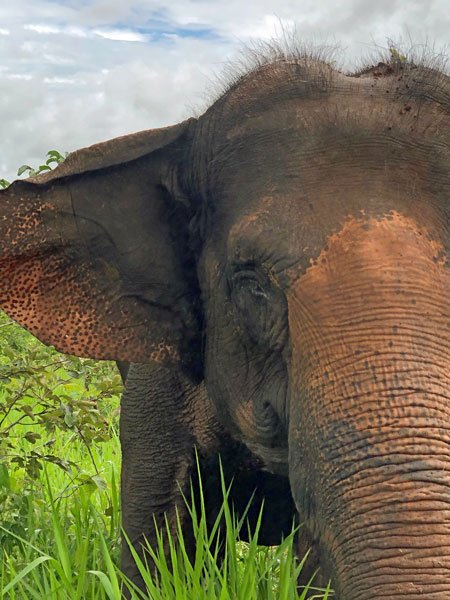 This story begins like all good stories – with the announcement, everybody is okay. ?

Kat & Scott live on sanctuary grounds at an overlook. With the location of their house and the way that sound travels out of the valleys, they can hear many sounds in the habitat. This was intentional, and it allows them to loosely “keep an ear” on the girls all night.

They were cooking dinner at about 9 pm when they heard a weird blowing noise. It sounded like an elephant noise, but it wasn’t a familiar noise. Kat & Scott immediately turned off their dinner and stepped onto the porch, listening intently. They heard it again.

Once outside, they could tell it was the sound of an elephant blowing out of their trunk, but it seemed different somehow. Blowing out of their noses is a normal noise, but something about it didn’t quite sound normal for any of the girls, and it was louder than it should’ve been. They heard it for the third time and realized that the only thing to do was to go check it out (the alternative was to keep worrying until they went to check it out ?).

As a reminder, it was 9 pm, which is not a time that the girls usually hear a 4wheeler in the habitat, much less get a surprise visit from both Kat and Scott. The first elephant they found was Maia, who was in the middle of 5. Maia was SO SO SO SO HAPPY to have a surprise visit. She thought it was the best thing ever. She was very wide-eyed and welcoming, and just, really thought it was terrific that her humans wanted to come to say, “Hi” at night randomly.

The next elephant they found was Lady. We usually check on Lady at night, as she is still new and had some nighttime insecurities from her time at the zoo (we will eventually phase that out). However, we were about an hour and a half before the time we typically check-in. When we do check on Lady at night, she has always been fully dry, sometimes napping (she does not get up). Well, at 9pm, she was wet – completely soaking wet, from head to toe, with a cute smile on her face. Just like Maia, she was pretty excited by this unexpected visit and so very innocent looking about her wetness. Rana was by herself in 4 and also was pretty happy to see her humans and very cute about it.

So, everyone was totally fine, safe, happy, and healthy. We never figured out who made the noise or why they made it. One of the girls may have run across a nocturnal animal and been surprised, or maybe someone unexpectedly got dirt up their nose & was trying to blow it out. We will never know.

It was nice to see everyone so excited and silly about a late-night “bonus” visit. Our only hope is that whoever made the noise won’t piece it together, and realize that they learned a way to “call” their humans.

Picture is a silly daytime Maia (who had just finished a swim and is shockingly clean. Don’t worry, it didn’t last.)

Read More About the Girls on Their Pages:

Your ticket for the: It Sounded Like An Elephant Noise, But…