Ingo On Sanctuary’s Joy and His Hopes For the Future 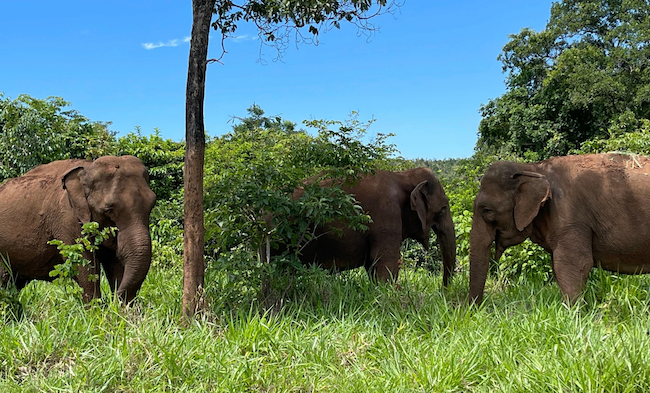 Time has flown by, and Ingo has now been at Elephant Sanctuary Brazil for about a month. While spending some time with Bambi, Mara, and Rana at snack time last week, Ingo expressed to Scott that he was struck by his feelings when observing the elephants at sanctuary – and how those feelings were more complex than they might seem at first.

Ingo’s background in elephant welfare runs the gamut from zoo care, to observing elephants in the wild, to working with other sanctuaries around the world. But in one simple moment, he saw captive elephants behaving simply like elephants. “No matter how big the space is, during the evening time, the elephants are still in a confined area; but I saw elephants in such an open environment for the first time, peacefully behaving as elephants.” Ingo said that the feelings that washed over him gave him chills. “After 30 years of this work, it is beautiful and also sad to say that not 1% of my experiences measured up to what I felt so deeply this day.”

While he has spent time in numerous zoos and sanctuaries, Ingo said that his initial wave of happiness came with another realization. “While I was feeling such immense joy, I also got very sad in the moment, because it took me, personally, so long to finally see elephants in captivity who were actually being elephants again.”

He continued, “I still see so much more that must be done, so that other elephants can finally feel the same as the girls here at sanctuary do. Spending their days and nights roaming around, scratching where they want, getting into ponds, drinking water, and splashing around, and just doing silly things that elephants do. Watching all of this makes you happy, but again it can leave a bitter taste, because you realize how much more is possible and should be done.”

This experience has only steeled his resolve to continue on the path of bringing more elephants to sanctuary. “This is all hard work to do, but we love to do it because we can see with our eyes the changes in the five elephants here – soon to be seven, and eight, and nine, and more. The idea of that gives us so much energy to fight for the next elephant, and the next, and the next. At the end of the day, we all want to see elephants happy, just being elephants again.”

Photo of Mara, Rana, and Bambi, just being elephants

Your ticket for the: Ingo On Sanctuary’s Joy and His Hopes For the Future

Ingo On Sanctuary’s Joy and His Hopes For the Future