In Memory of Pocha 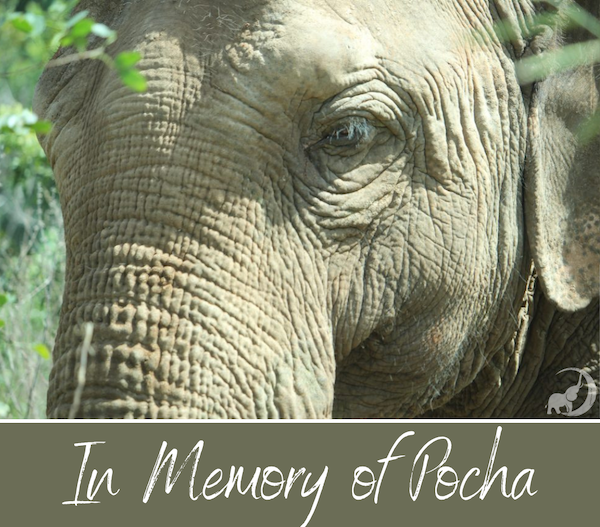 It is with heavy hearts that we announce this morning that Pocha passed away last evening. While we don’t yet know the cause of death, a necropsy will be done shortly to help us determine what happened – though we may not have results right away.

While Pocha was in Mendoza we did, on occasion, see small signs that made us worry that she had underlying health issues, but nothing was ever diagnosed. When she and Guillermina arrived here at Elephant Sanctuary Brazil, she had had an instance where she became tired and was a little slower to eat but, after a multivitamin shot, she improved. A few days ago, we noticed that she was picky with her hay, though she was still grazing and enjoying all of the produce that she was given. After a vitamin shot last night, she looked brighter and, though still tired, had more light in her eyes. However, when we returned to check on her later in the evening, we found that she had passed.

Guillermina, who was sharing the yards near the barn with her mother, gave long rumbles to call her friends – and you could hear them rumbling back to her. Once we opened the gates for the other girls to enter, Bambi, Mara, and Rana were there waiting to be with Guille. Rana walked over to Pocha with Guillermina for a few minutes and then went back to the others. Next, Bambi walked over, but stayed at a distance, somewhat wide-eyed and looking concerned. After Bambi returned to the other girls, Mara came and stayed with Guille and Pocha. After that, one by one, the other girls returned, this time Bambi backing up to Pocha, smelling her and caressing her face. Just after midnight, they all stood on different sides of Pocha, quiet and relaxed, having one of those elephant moments that only they understand. A little before 4 am, Maia also came to be with Guillermina.

Each girl stood nearby, some longer than others, and observed Pocha’s body with respect. Elephants have an innate ability to communicate with each other in ways we will never understand and that’s what appeared to be happening among this group of herd mates. With all of our years working with elephants, we have never seen this level of herd support given to another during a passing. Their support is proving much more familial in nature than we have witnessed at sanctuary in the past and, although sad, there is also something incredibly beautiful about what is taking place.

As she is coming to understand what has happened to Pocha, Guillermina has been very gentle with her mother. She touches her and smells her and caresses her with her trunk, seeming to sense that her mother is no longer of this earth. While Guille didn’t stand completely over her mother’s body (which elephants sometimes do), she did very gently maneuver her feet over Pocha’s front legs and stayed there for a while.

Though this is a difficult time and it can be hard to process such a loss, we have gratitude toward Pocha for the love and stability she was able to provide to Guillermina for 24 years. Once the two were at sanctuary, she was able to see her daughter experience true joy and begin to build relationships with other elephants – something that might have only been a dream for Pocha. There were moments when you could see Pocha watching Guille with the other elephants, and she had the brightest look on her face. We also hold a great sense of relief that both made the journey to sanctuary before Pocha’s passing, so that Guillermina is not processing her grief alone; she now has other elephants to turn to. Perhaps Pocha had a sense that her time at sanctuary was short and encouraged Guille to branch out, enjoy life with friends, explore nature, and truly discover what life as an elephant is meant to be. In a few short months, she was able to remember that the world was more than just a concrete wall in front of her. In actuality, life could be big and beautiful and filled with opportunity – and she was also able to give that big life to her daughter with love and a sense of immense pride.

Please feel free to leave your thoughts and memories of Pocha here: https://globalelephants.org/in-loving-memory-of-pocha/

Your ticket for the: In Memory of Pocha

In Memory of Pocha