In Memory of Pelusa 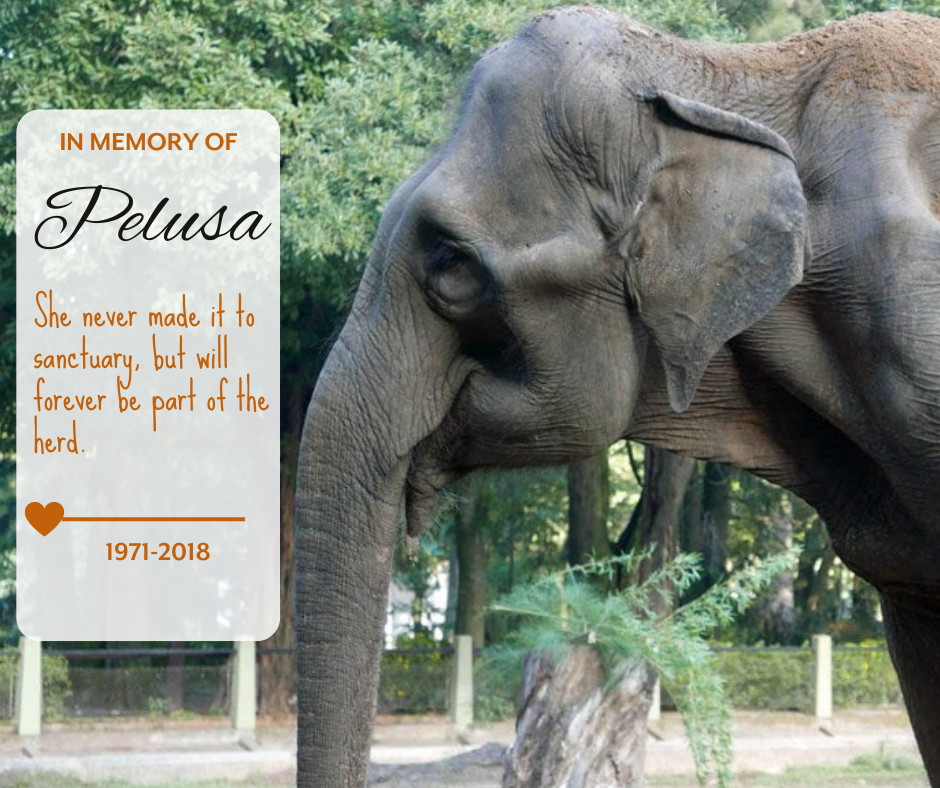 Four years ago, a captive elephant named Pelusa, died. And although she never made it to the sanctuary, we have not loved her any less. For those of you who don’t know her, she was a lovely but struggling elephant that we were introduced to and asked to take at the beginning of the existence of Elephant Sanctuary Brazil. She was over 1500 lbs (680 kg) underweight and her feet were in horrific condition. The zoo in La Plata, Argentina decided that they wanted her to come to the sanctuary for specialized care and to live out the rest of her life surrounded by nature and other elephants. We went to meet her and were initially heartbroken, she was in very poor condition and would hit herself in the face with her trunk while stereotyping. But one of the most beautiful things about Pelusa was that after about 5 minutes of being in her presence, her inner strength and radiance shone through. You could see she was magnificent, even as she was falling apart.

We agreed to take her, but Brazilian regulations required us to build at least one of the larger yards before being able to accept her. In the early days that meant raising funds that were hard to come by and our small team then building the fences. While we navigated our way through those struggles, we worked with Pelusa’s loving keepers (they did adore her)  to try to improve her care. During this time she didn’t really improve, so as we were closer to having the 4th Yard completed, we decided to send a caregiver to care for Pelusa exclusively, to make sure we could give her as much of sanctuary as possible without her actually being here. Her caregiver not only provided her with daily care, but would buy her food and snacks, and help her build the confidence she needed to start using the yard behind her barn, which had a much softer substrate and was more kind on her feet. Pelusa was putting on weight and emotionally improving.

While the arduous task of permits and paperwork began, the zoo visited and we had the honest conversation about the risk of transport on an elephant that was so unwell. Pelusa had not laid down in years, since she once struggled to rise. And as a really big elephant (she was incredibly tall) with terrible feet, the journey would not be easy. They acknowledged that the relocation could end tragically, but felt it was worth it to give her even a day at sanctuary, in the company of others who could truly understand her (at that time Maia and Guida were already here). Permits had not yet gone through as we were making modifications to the crates so she could essentially sit down if she needed (something she did at the zoo) when we got the call that Pelusa had gone down. Scott hopped on a plane to go see her.

Unfortunately, what he found was that after years of struggling, Pelusa seemed to have nothing left to give. She showed no signs of wanting to get up, was resistant to any assistance in propping her up, and after a day, the keepers, management, politicians (public zoos are run very differently in South America), and even a judge, made the decision to euthanize her. And although she never made it here, she had found a place deep in our hearts and we consider her part of the sanctuary.

Please take a moment today to think of her, to look at her, and through the gaunt appearance and tired eyes, still see the magnificent being that she was. She deserved to feel the love from around the world that all of the girls here feel today and to be seen for who she was without the harsh toll that captivity took on her.

Your ticket for the: In Memory of Pelusa

In Memory of Pelusa