In Memory of Guida 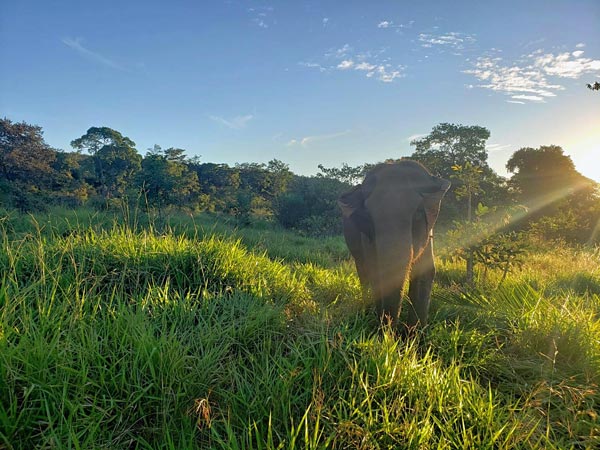 Honestly, I don’t want to write the words because it makes this all real, but Guida passed away last night. Our strong and grateful one, who was supposed to live forever, apparently had other plans. It’s never easy to lose an elephant, but when there’s no notice and their light is still shining so brightly, it harder to accept. We know the damage that decades in captivity can cause, but selfishly, we weren’t ready to lose her just yet.

Maia is with her as I write this. She walked over to Guida, somewhat tentatively at first, seeming unsure of the scene before her. Initially she kept her trunk at a distance, taking short smells and then pulling away. After a couple of moments that shifted to her touching all over Guida and stopping to smell different parts, forming a picture of what happened. Maia was quiet but also out of sorts and we felt like we were creating a distraction. We gave Maia some extra hay (she finds comfort in food) and decided to leave her alone with her sister to process and feel what she needed to feel.

Rana spent a lot of time near the fence line where Guida was last night. She would put her trunk up and smell in her direction, clearly knowing there was something wrong. This morning she has stayed closer to the barn acting like her bright self, letting out a couple of squeaks around breakfast time. She isn’t in the area that Guida is in, so we are unsure if she is going to go over to her, but the space is open if she chooses to. We will not force her; she clearly knows where Guida is.

As for what happened, we’re not certain. Yesterday we found her ‘stuck’ in a spot she shouldn’t have been stuck in. It was a somewhat narrow cow trail and she simply wasn’t willing to lift her one foot to cross over the other. Guida is our girl that chooses to take the difficult paths, this was completely unlike her. We’re not sure why she felt she was stuck, but we helped her get out just by widening the path a tiny bit with sticks, and verbal encouragement, and she finishing going down the trail. Then she seemed to believe she was stuck in the stream, which was only a couple of inches deep and a couple of feet wide. Her body was clearly exhausted; her legs would slightly buckle from time to time. We used the backhoe to help her out when we saw she wasn’t going to leave on her own. During that process, she would take a step or two, and then lean on a dirt mound to rest for a bit, take another step or two. When she did get out, she laid down. We placed an IV, started her on several meds, and pulled bloods with the hope she would allow her body to rest. But, after some time, her breaths became more infrequent until they simply stopped. It was quiet and peaceful, but not the outcome any of us wanted.

It’s hard to imagine that Guida won’t be down there when we go to take care of the girls and it’s hard to accept that her silly trumpet attempts from the day before will be the last we ever hear from her. What is the most heartbreaking is looking at Maia and knowing she lost her best friend, only a few years after she really found her. At this point it’s impossible to look at her and not cry. We know this is all part of the journey, that this will help her to open herself more to other elephants and cause exponential emotional growth. We’ve seen it before. But right now we find ourselves seeing an elephant who sometimes struggles with emotions, having to deal with one of the most devastating occurrences. Sanctuary causes elephants to open themselves up emotionally, and beautiful changes happen because of it, but it also makes them vulnerable to significant hurt as well. Hopefully, Maia will open herself up and allow Rana to help her through her struggles and show her she has another friend she can lean on.

Please visit Guida’s memorial page and leave a note for her here →   We know how many of you fell in love with her and are grateful you helped her feel an unconditional love she had never known.

Your ticket for the: In Memory of Guida

In Memory of Guida