In Loving Memory of Merry 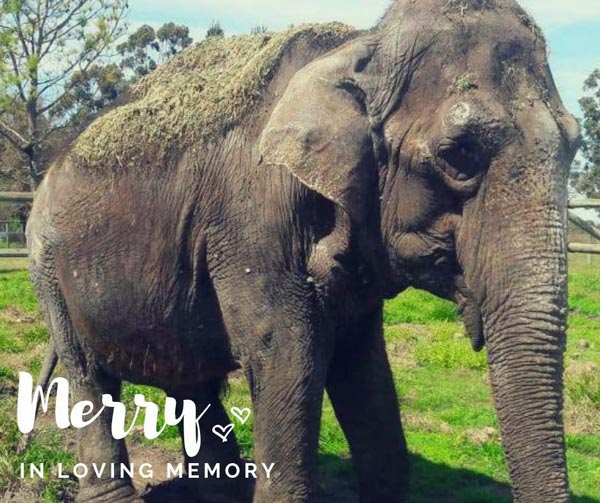 We wanted to share with our supporters the passing of Merry the elephant. Many of you did not know her. She was an ex-circus elephant in Argentina, that was living at a small zoo. Her owner decided he wanted a better life for her, a life with other elephants, but he was cautious about sanctuary because it was a life he did not know. After discussions with Alejandra from Foundation Franz Weber, he agreed to send her to Elephant Sanctuary Brazil. Merry’s future rescue was not shared because of the delays with import permits- but we had hoped that the announcement of her future would soon be coming.

We decided to still share Merry with all of you because we feel every elephant deserves to know the outpouring of love that comes from those who support the life of sanctuary. Neither Scott or I had ever met Merry, just in photos and video. Alejandra, was lucky to have met her in person and said that it was sad to see her alone but that she was beautiful inside and out.

Merry was one of those elephants that is easy to instantly fall in love with. Her owner thought she was very well behaved, but you could see her ‘inner punk’ shining through in the videos we had watched of her. She looked like a total grandma, but one of her most endearing qualities was her hairy ears, elbows and knees. The amount of old lady hair she had was spectacular. She was a total cutie.

Her unexpected death has broken the heart of many and serves as a reminder that the captive elephant population in South America is an aged one. We fight to get them to sanctuary, but we do this not knowing how long they will revel in the joys it provides. But as we have seen with Rana, even a week brings about a healing and embracing of life that forever changes them.

We don’t know the exact cause of death (she was in her 60s) and it may be several more weeks before more details are learned but the owners suspect it was acute heart failure. All was normal in the morning but just a few hours later she fell over and within the time it took for the owner to run to her side, she had already passed away.

We ask that you please join us in sending Merry love, light, support and anything you feel is appropriate. Help her to know that she was cherished simply for who she was. Even though she never made it through the sanctuary gates, she had already stolen our hearts which now mourn her passing and celebrate her beautiful spirit.

We will be planting a pata-de -Elefantes (elephant’s foot) tree in her memory- next to Pelusa and Ruperta’s trees.

IN MEMORY OF
Pelusa

Your ticket for the: In Loving Memory of Merry

In Loving Memory of Merry