How Do Asian and African Elephants Differ? 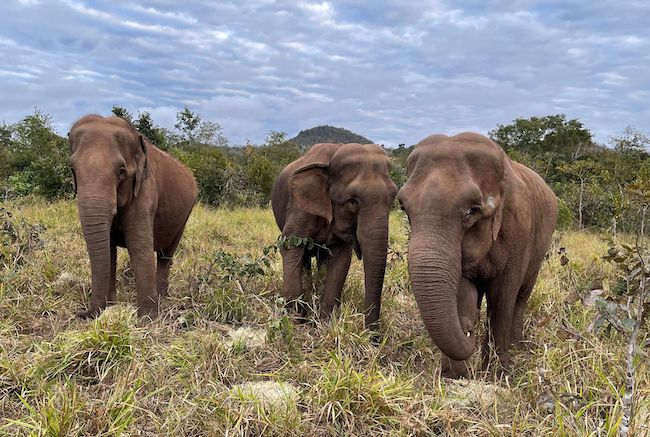 To date, all of our elephant residents have been female Asian elephants. But we do have elephants awaiting rescue that are female African elephants. Our first African elephant at sanctuary will be Kenya from Mendoza in Argentina, then Pupy and Kuky from Buenos Aires. In addition to the uniqueness among the personalities of individuals, there are also significant differences between Asian and African elephants as species.

The species have a number of other unique qualities that we will explore as time goes on and we introduce our new residents. Each will have specialized diets, but they also have diverse qualities of their feet, tusks, number of toenails, teeth, lip shape, and skin texture. But they do share similarities, like their well-defined social structures in the wild. Both African and Asian elephants are matriarchal, with males eventually leaving the herds once they become old enough.

There is no overlap in nature between the physical ranges of African and Asian elephants, so they do not live together in the wild. This is one of the reasons we have opted to build unique habitats for the specific types of elephants. There are also potential behavioral differences that could come into play. As with the arrival of any new elephant, the addition of African elephants to our current Asian group will bring exciting challenges and lots of unknowns. We are enthusiastic about the opportunity to expand our sanctuary family and to see how each individual grows into their new space.

Photo of Rana, Mara, and Bambi showing their twin-domed heads

Your ticket for the: How Do Asian and African Elephants Differ?

How Do Asian and African Elephants Differ?