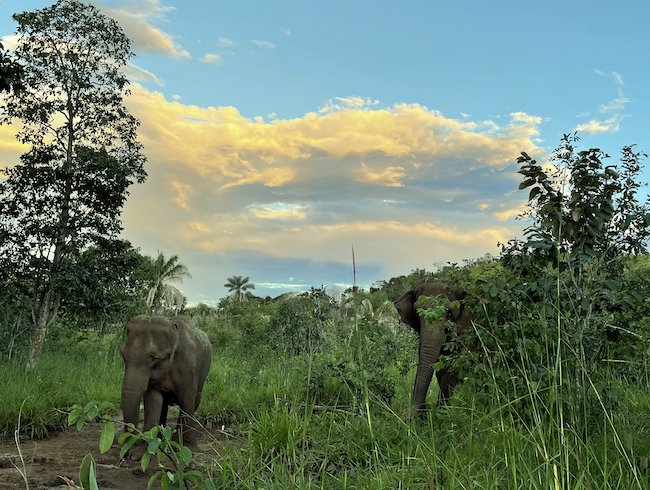 Happy Re-Birthday, Mara!  We can hardly believe it’s been one year since this incredible, spunky, vocal squeaker made herself at home at Elephant Sanctuary Brazil.

One year ago today, she walked out of her crate, dusted herself, and promptly laid down on a pile of dirt to nap. She had a loyal group cheering her on before she arrived, but that sweet dusty nap captured a few thousand more hearts that day. The broadcast of her homecoming was also our first video ever to reach a million views.

She started to settle in, but it quickly became apparent how special she was. Within a few days, she crossed paths with Rana, and the two erupted into some of the most expressive elephant greetings we have ever witnessed. Mara and Rana quickly became inseparable. Months later, when Bambi arrived, the duo became a trio. While the new addition took some time to find her place, the three are now deeply bonded.

After decades of loneliness and being able to see, smell, hear, but not physically touch other elephants, Mara has come into her own in the past year. She loves being surrounded by and touching her close friends. To her, every day, every friendship, and every moment is an opportunity for a party that involves trumpets, squeaks, and rumbles. Her friends – especially Bambi – agree. If her friends wander too far away, she doesn’t search for them but just emits her signature squeak, and they come running.

The past year hasn’t been without challenges. Mara spent six months battling a gastrointestinal issue, which resulted in a few worrisome moments, including a significant loss of weight. She is now eating normally again (well, normal for her; she is still one of the pickiest elephants we have ever known). Despite her challenges, she hasn’t lost her spark, her squeaks, or her love of her friends.

We are delighted that she’s been a part of our sanctuary family for a year. Watching her grow and heal has been fulfilling to witness.

For those who missed our announcement earlier this week, we have partnered with FLOAT to offer a limited-edition design of Mara shirts, tanks, and hoodies to celebrate her incredible first year at sanctuary.  They are only available through Sunday, May 16. Click here to learn more or order – (and yes, they ship internationally!).  We feel like this shirt – and design – really captures who Mara is.

We can’t wait to see how she continues to evolve and grow in the years to come.

Photo of Mara, surrounded by a beautiful sky and the wilderness of Elephant Sanctuary Brazil, and – of course, with Bambi nearby

Your ticket for the: Happy Re-Birthday to Mara!