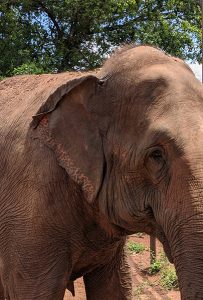 Rana has come amazingly far in two years. In many ways, she is not the same elephant. Sanctuary changes everyone—human, dog, or elephant, but Rana’s emotional growth has been remarkable, even by sanctuary standards.

She arrived as the awkward newcomer who wasn’t well-socialized and was on a mission to be best friends with Maia and Guida, whether or not they wanted her friendship. Maia and Guida believed this was their personal paradise and weren’t overly excited about the newcomer, especially one that tried to insert herself into Maia and Guida’s every moment.

After a few difficult moments of rejection, Rana listened, she learned, and she grew. Now she is the unofficial welcoming committee. She is the one who reaches out to each newcomer and accepts them precisely as they are. More importantly, she puts her own desires aside and is whatever each individual elephant needs her to be. She helps them learn what it means to be a true herd member. Every elephant who has come since—Ramba, Lady, Mara, and Bambi—is better for having known Rana.

Rana is so much more than a friend to others. She is sweet and affectionate with those she loves and trusts but quick to put up firm boundaries with those who don’t show her the respect every elephant deserves. Rana loves hay, cabbage, and papaya. She frequently trumpets her joy and is always quick to join an elephant party with her happy vocalizations and silliness. She loves being around the other elephants, and you can see how much happiness it brings her to have so many friends.

It’s hard to believe it has been two years since Rana walked off that transport crate and became the third resident of Elephant Sanctuary Brazil.

Happy Re-Birthday, Rana! May you continue to spread your happiness and joy everywhere you go and receive double that in return!

Your ticket for the: Happy “Ranaversary”!