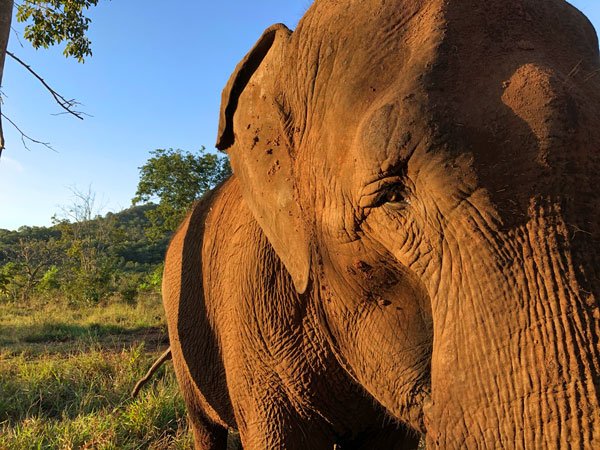 Today we are celebrating Mara’s one-month anniversary. In our minds, it seems impossible that it has only been one month. This is either proof that it’s time to retire, or that she fits in so perfectly that it is difficult to remember a time when she wasn’t here. In the past weeks, we have seen a lot of changes in Mara, not the least being that she gained 9,000 pounds of Rana.

We recently saw a video that had clips from the EcoParque and were struck by how visually different she is already. Overall, she looks so much brighter, and she stands more upright. She appears much more present – both mentally and physically.

When Mara was at the Ecoparque, we would see glimmers of the light that shone within. Cute, silly, and playful moments that were only a little hint of what was hiding inside. With the nurturing of an elephant best friend, wild space to explore, and freedom of choice, those little bits are now the glory of Mara. That inner spirit which was always there, yet masked for far too long, is alive and shining brilliantly every day at the sanctuary. One of the greatest gifts is to hear her squeaking and rumbling out in the habitat with Rana, knowing that random ‘normal’ moments of her day are now a cause for celebration. When we were in Buenos Aires setting up her transport crate, we observed Mara as an elephant starving for social interaction. Now, she has a friend and a friendship that defines elephant sisterhood, a gift to both that is indescribable and tragically rare in captivity.

The most significant physical change, although she is putting on a nice amount of muscle, may be her eyes. She has eyes different from any elephant we have ever known. Obviously, she had the same eyes at the park, but they were often masked and sullen. Now, they are incredibly expressive and full of life. It’s the first thing that welcomes you as you come around the corner, her gorgeous amber eyes. They are usually accompanied by her little sticky-outy ears and an occasional head tilt that is ridiculously endearing.

This is just the beginning, only the first 30 days. To see Mara, surrounded by the magic and glory of Sanctuary, and to see those radiant amber eyes, makes it difficult to imagine her past. As with all captive elephants, Mara comes with many scars and traumas masked within. Her journey, supported and embraced by Rana, will allow Mara to work through her past, to heal and grow and affect everyone and every elephant lucky enough to know her. No matter where that journey takes her, we are thrilled she has found her home at Elephant Sanctuary Brazil. ❤️

Your ticket for the: Happy One-Month Anniversary, Mara! ❤️