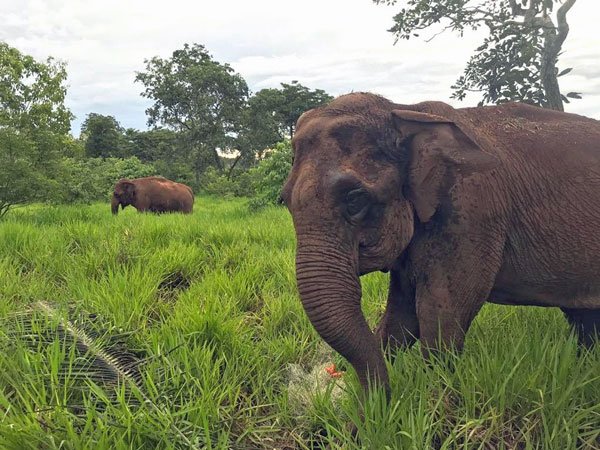 Ramba’s rescue journey took seven years: from confiscation from the circus, to failed relocation to the US, to not having any options, to Elephant Sanctuary Brazil being created in part because of her. Over those seven years, with the help of Caro, Consu, and later on Diego, we brought as much of Sanctuary to her as possible. We were involved in her relocation to the road-side zoo, stayed with her numerous times over the years, and were involved in her daily care through her loving caregivers. Everyone who has followed us over the years knew about Ramba – in many ways, she was our poster child even though she didn’t live here, in Brazil, at the Sanctuary.

So, it shouldn’t surprise us that her two-month anniversary yesterday almost slipped under the radar. She was here in spirit for so many years, and we, like many of you, already loved her. But now she is finally here. Even though it’s been two months, there is much she has shown us, and she has brought so much to Rana, Maia, and now Lady.

Ramba and Rana so quickly progressed from being cautious about touching to inseparable. Ramba and Rana seem like they have known each other their entire lives; Ramba has adored having a friend – and you all know Rana’s opinion on her bestie. She couldn’t be happier.

We often talk about what having Ramba has done for Rana, but we don’t talk as much about what it means to Ramba. Ramba loves having a friend. Even though Ramba is older, Rana’s size gives her a bit of a big sister role, someone to rub on, to stand over her, to love on, to do everything with. Having Rana to “guide” her through Sanctuary helped Ramba acclimate. Ramba immediately owned the space, confident that everything was hers, and that everything she did was ok (she is correct on both counts). She is a rumble queen; she rumbles almost all day long; she radiates total contentment.

Now we are also starting to see her spunky, stubborn side, one we knew from years ago but had disappeared before coming to the sanctuary. She is back to being the confident grandma who makes you work for things. She understands what we are asking of her, but she often thinks she deserves the treats first; before the behavior or just because she is cute. Sometimes she wins. How could she not? She has earned it.

Ramba is a total gift. She is easy and hard all at the same time. It feels like she has always been here; after all, she has been part of this place and our hearts for many years.

Happy two-month (and one day) anniversary, Ramba!! You are perfect, and we are grateful for you every day!  ❤️

Your ticket for the: Happy 2-Month Anniversary, Ramba! ❤️