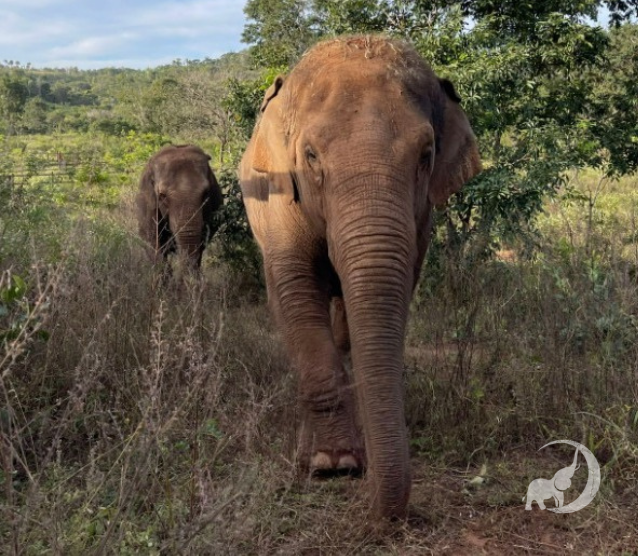 We make it a priority not to set expectations when new elephants arrive, and Pocha and Guillermina have been a reminder that growth and healing doesn’t always happen on a predetermined schedule. Even before her first days at sanctuary, Guille has been different in many ways from other elephants we’ve known in the past. Her relationship with her mother was often not a respectful one. She was possessive of training time and the transport crates in Mendoza, and would either kick, push, or corral her mother away. Pocha had almost nothing to give Guillermina throughout her childhood, so she allowed many of Guille’s youthful behaviors to go uncorrected. The result is a pattern of dominance that Pocha has become accustomed to. It probably plays a large role in why her initial approach to other elephants is very submissive.

Since her arrival at Elephant Sanctuary Brazil, Guillermina has shown us more of who she is; what we can say for sure is that she’s still very much in the process of becoming who she will be. She’s a young elephant who has never truly interacted with any elephants other than her mother and Tamy (over a wall), until now; as a result, she doesn’t understand much about elephant behavior and knows nothing about elephant dynamics in a group setting. Being 22 years old, one might compare her to an 18-year old human. Much like a teenager, Guille isn’t always perfectly behaved, her judgment might not always be well thought out, and her manners and respect need to be polished up. Many captive elephants her age would likely display the same behaviors.

Guillermina is processing a lot of information from all directions at the moment. She is only just beginning to spend time with the other elephants, and her comfort level with that varies. But other elephants in the herd have had to learn how to interact with others appropriately, and that’s a lesson Guille has ahead of her. Thankfully, each of them having gone through that same process helps them be more patient with the elephants that come after them. Guillermina will undoubtedly receive some pretty gentle corrections, which is normal – particularly when younger elephants are introduced to a group. Right now, she is doing really well with introductions, but that may shift when she becomes more comfortable in those relationships. Only she can decide how quickly to pick up on how to live with other elephants, what works within a group setting, and what it means to be an individual who makes mistakes, learns lessons, and evolves as a result of all that sanctuary has to offer.

Photo of Guillermina, with Pocha following behind

Your ticket for the: Guillermina’s Growth