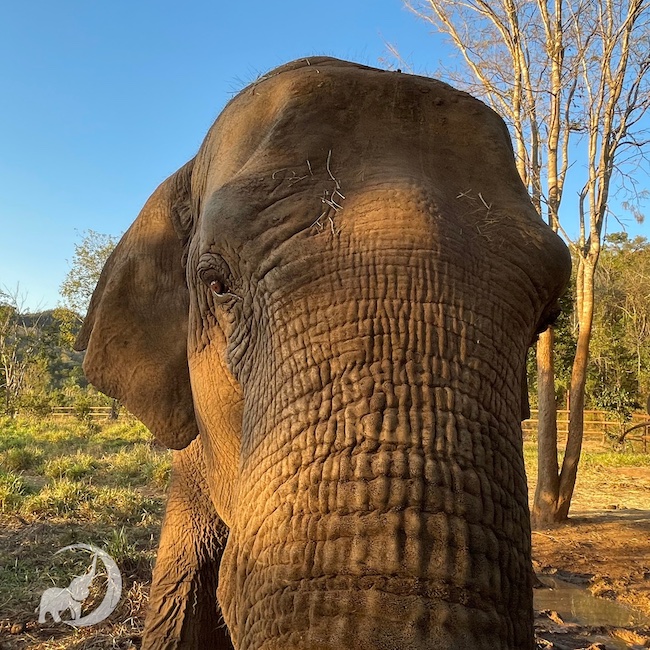 During an evening feed for Pocha and Guillermina last week, Scott and Kat went near Yard 4, but the elephants were nowhere to be found. Since this was their first 10 pm feed in one of the big yards, they decided to drive out and make sure all was well. Eventually,  they sighted Maia, Mara, Bambi, and Rana. That accounted for everyone except for the two elephants in question. After turning the motors of the 4-wheelers off and listening for a moment, Kat and Scott both determined that they could hear the “missing” ladies in the creek. Because neither Pocha nor Guillermina has a fantastic sense of place, the humans thought it best to check to make sure the elephants were in the creek by choice and truly having a good time.

Once Kat and Scott arrived, Guille and Pocha were on their way out of the creekbed. Because they are still building muscle tone, it would make sense for the new elephants to use one of the easy exits from the creek. BUT, they heard ladies in Yard 4 vocalizing, so an excited Pocha and Guillermina decided to change directions and take on a steeper slope in order to exit on the other side – and they did so much more easily than we could have predicted. Guille, in fact, passed her mother on the way out and hurriedly walked out of sight.

Because Guille sees the barn as a sort of “home base,” Scott and Kat assumed she’d head that way, which she did indeed do. But Pocha decided not to join her daughter and instead went on a little walkabout. Knowing that Guillermina would follow the 4-wheelers if they left the barn, Kat stayed by the chute and closed and opened the gate, because Guille is attracted to that sound. That allowed Scott to safely drive off in the other direction, looking for Pocha – but Pocha walked back to the barn on her own after a few minutes.

Night feeds are generally short and sweet, but Guillermina and Pocha made this evening visit a little longer than normal. The scenario was a funny, yet touching reminder that when they arrived about two months ago, neither elephant was comfortable leaving the barn, let alone exploring the habitat at night, on their own. Both the people and the elephants got a little extra exercise that night – something the elephants certainly benefited from.

Photo of Pocha showing off her wrinkly nose

Your ticket for the: Guille and Pocha Make Night Feed Interesting