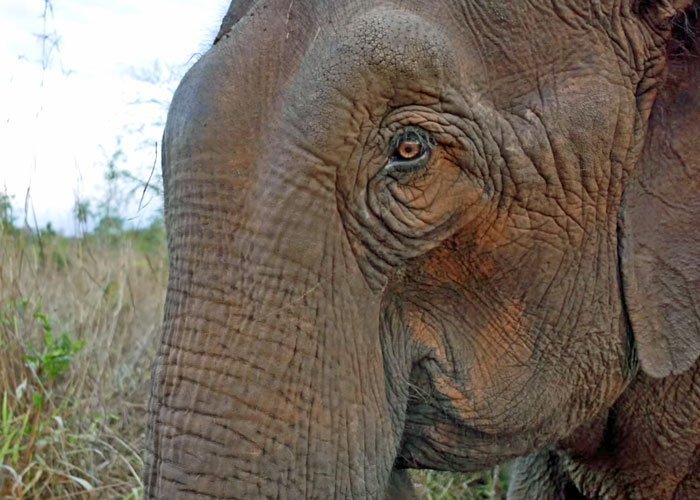 Because of a request, we are sharing this private update. We have an ‘Ele-Guardian’ program that allows you to adopt one of the girls and receive special monthly updates that only guardians see. After Guida’s passing, this is part of what was sent out to her guardians. Although we never share their special updates, we were asked to do so for this one. So here it is…..

Guida is part of Elephant Sanctuary Brazil and always will be. Her and Maia were the first, and even after decades working with other elephants at sanctuary, they still opened us up to even more. Now and again you meet an elephant that seems like an old soul, understands the bigger picture, and seems to comprehend that no matter what happens, things will be ok. Often it seems those are the elephants whose lives seem to be cut short, and they leave before what we feel was their time. In Tennessee, it was Barbie, and here it is Guida. Every elephant is unique in their own way, and we finally truly understood how parents could say they don’t have a favorite because each touches a different part of your soul. But some stand out for shaping the world around them. We know Guida’s spirit will always live on here, but selfishly, we miss her smile and gazing into her soulful eyes.

Although we will see Guida in many parts of the sanctuary, the biggest will be in the gifts that she gave to Maia. In the past, Maia had treated Guida with a brutality that is only manifested in the horrors of captivity. After decades of a very unhealthy relationship, Guida was able to let go of her distrust, her fear, and her anger towards Maia and allow her into her heart to become friends. We’ll never forget how tentative Guida was to reach out towards Maia, through a set of bars, as she walked off of the trailer at the sanctuary for the first time. She barely let her touch the very tip of her nose before she pulled away. Scott and I slept at the barn that night (and many after that) and laid in complete darkness as we listened. They started to talk to one another softly, then began with vocal celebrations and silliness around 1 in the morning, which would erupt every hour or so. When we woke with the sun, they were standing side by side, up against the dividing gate, holding one another — decades of struggle forgiven in under 12 hours. That was the beauty of Guida.

Guida’s love and gentle lessons continued throughout those first months. She offered her friend companionship, joy, and confidence to explore their new life, to trust that things had finally changed and they could leave all of the trauma and hurt behind. When Maia would struggle, Guida was there. When Maia started to fall back towards her comfort emotion, anger, Guida would simply walk away. It was her way of letting Maia know, without violence, that Maia had the choice to act out, but if she did, she would have to do it alone. Guida seemed not to be concerned about her own healing, but about that of her sensitive sister who had never let life in and always protected herself from the bad by keeping everything at a distance. Maia trusted Guida enough to let her in and that created enough space in her heart for the rest of us.

It’s not that Guida on her own wasn’t beautiful, on the contrary, she had an inner light that shone through even on her worst days, one you couldn’t help falling in love with. But it is the gifts that she gave to others that will undoubtedly live on. Through her reawakening our dormant awareness of the depth and connectedness of elephants, to her healing of Maia, and the gifts that will allow Maia to pass on to all of the elephants who follow. She will forever shape the sanctuary, and although we provided her with a new life, we could never repay the gifts she gave to all of us. ❤️

Your ticket for the: Guida’s Gifts