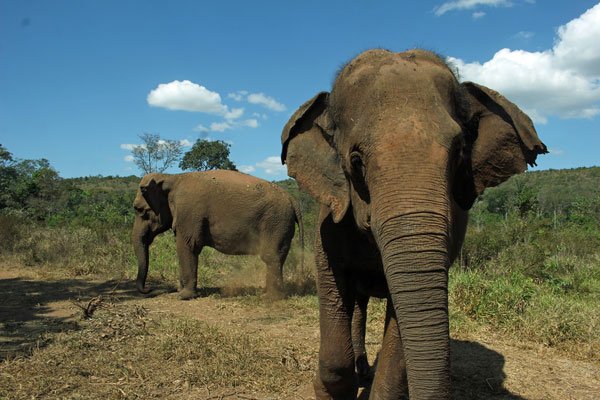 While Rana and Mara are easy to separate, Mara has still been attentive to the separation. Now, we are starting to see a shift that suggests another layer of her growing confidence.

When Rana and Mara were near the barn one recent morning, we brought Rana into the chute for detailed cleaning of her vulva. Rana arrived with significant issues, and although they resolved after several months of treatment, we wash her vulva periodically to make sure she doesn’t develop any recurrence.

As we have mentioned before, we separate Mara and Rana into two stalls before opening the chutes. Once we close the gate between the stalls, Mara usually likes to walk over to the gate to check on Rana. Then, she’ll go back to what she was doing (which is usually eating). This morning, she didn’t react to having the gate closed.

Mara tends to observe what is happening to Rana in the chute, but this morning, she didn’t seem to feel the need to. She went out on her patio; she snacked, she dusted. At one point, she started to walk over towards Rana, but, on the way, she found some leftover produce in the stall and ate that instead.

It appears as though Mara is beginning to feel more settled and sure of herself. Not only does it seem that she has accepted these separations are short-lived, but she is also starting to understand why the other elephants will quickly come over to receive treatments. The food rewards can be pretty special.

Don’t worry, though – they both still see getting back together as a reason to have a party. ?

Photo of Rana walking over to say hello to her humans while Mara continues to dust contentedly behind her.

Your ticket for the: Growing Confidence