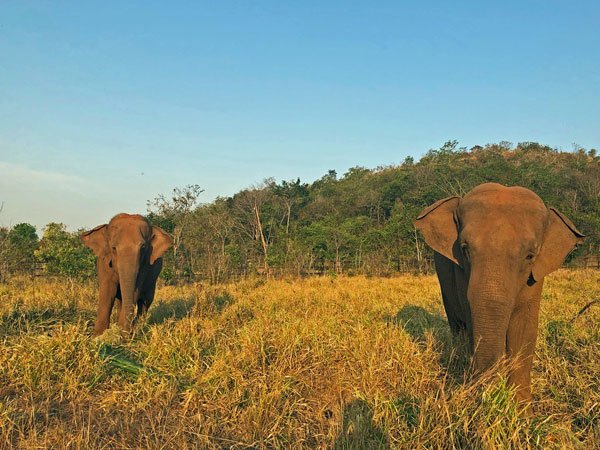 Kat was recently feeding Rana and Mara near the pond in Yard 4. They were sharing space with Maia, but she wasn’t around. As soon as Kat put down Rana & Mara’s dinner, Maia popped up with a big grin, ready for her meal. It was hilarious timing of Maia to show up– it was the best moment for her to pop up for everyone to eat maximum food.

Maia, rather than waiting for her meal, walked over to Rana and “helped” Rana finish her meal. Rana had been fed first, so she only had fresh greens and some hay left. Maia immediately ate the greens, then stood there with Rana, enjoying her hay. They seemed happy sharing. Once Rana’s flakes of hay were almost gone, Rana walked over to Mara and started eating Mara’s hay. Mara didn’t seem to mind sharing either. With Mara and Rana occupied, Kat had Maia follow a short distance away and gave Maia her dinner. Since Maia ate Rana’s greens, Kat pulled out some of Maia’s greens for Rana.

Once Maia settled on her dinner, Kat headed back over to give Rana the greens and some additional hay – that way, Rana could have her complete dinner. Of course, Mara got some extra hay, too, just so that everyone would hopefully eat their own food.

Kat sat back, feeling pleased that everyone was getting a complete dinner after all. And that’s when Kat found out that Rana didn’t want to eat her greens that day. Apparently, that’s why she let Maia eat them in the first place. ?

Mara, ever a good friend, walked over to inspect Rana’s pile and quickly ate the extra greens for Rana.

Kat left, laughing. About an hour later, we checked the cameras and saw that all three were still in the area, hanging out very close – no more than twenty yards apart, and frequently much closer. We checked again after dark and saw the three of them walking into the woods together.

Photo: Rana on the left, and Mara on the right, enjoying dinner another night.

Your ticket for the: Friends Helping Friends Eat Supper