Finding Their Way Back to Themselves Is a Journey 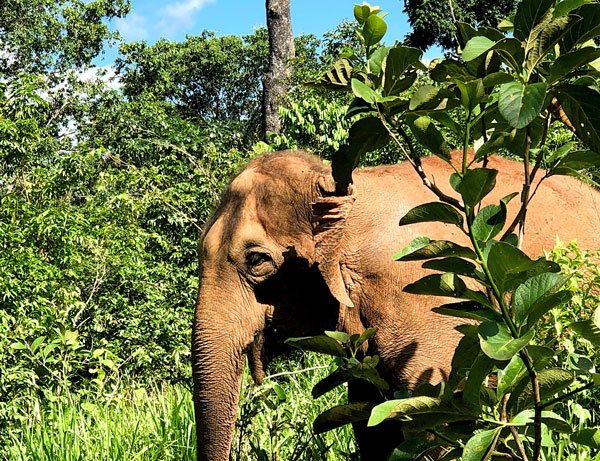 We wished sanctuary instantly fixed everything the moment elephants arrived, but believing so would diminish the impact that a lifetime of captivity has on such an emotional, intelligent, and sensitive being. Some do seem to recover almost overnight, but for most, finding their way back to themselves is a journey. Sometimes it takes longer than others.

That being said, Lady is doing very well, but it seems she will be one of the elephants that will take a little longer to find pieces of herself that haven’t been seen for decades. Lady has been very cooperative with foot soaks and treatments since her arrival but has always been very watchful. She will be taking treats from my hand and not even looking at me, instead watching Scott as he walks around to add a solution to her soaks or spray her feet. It’s not a casual watching; it is following his every move, waiting for him to do something to hurt her. Those who know Scott know he has incredibly soft energy and elephants gravitate towards him- it’s not him, it would be the same or worse with anyone. It’s her past that is dictating her behavior.

This behavior is something we’ve seen many times before. Maia was always waiting for something terrible to happen, ready to lash out when needed. But it was all fear and insecurities. She wasn’t looking to be aggressive; she was looking to defend herself in a way she knew worked. It was a behavior her past dictated- Maia was the ‘bad girl,’ and they made her pay for it. Her response was how she survived. Lady is similar in her weariness of what is going on around her. It was a behavior we witnessed at the zoo. She was quick to hit the bars or her stall when new people or her caregivers stepped too close, too fast, or did something she felt needed a warning. Lady has put someone in the hospital, and there is intention behind her actions, so it goes past just a warning. This doesn’t make her ‘bad,’ it makes her delicate. But denying this about her doesn’t do anyone any favors.

When working with Lady, we reassure her often, and she does now seem to understand us telling her, ‘it’s ok, you’re all right’ if she is in a situation that makes her slightly nervous. With all elephants, we continuously tell them where we are and what we are doing: ‘I’m coming around this side,’ ‘Don’t worry, I’m not going to touch you.” But with Lady, we make sure she sees where we are and takes note before we move forward. It may seem like semantics, but the little things are significant with an elephant who appears not to have trusted her situation for some time.

For those worried (my husband would have hated that I didn’t get to the point sooner), Lady is doing better. She’s far from ‘there’ yet, but there is a visible improvement. Scott and I talk after every session we have with her about what we see with her, what we would like to try or do differently, etc. After last night’s foot soaks and treatments, we both immediately began to discuss that it was the first time she seemed at ease with the whole process. She wasn’t intently watching him, her eyes were softer, and overall there was an ease about her. It’s always possible that it’s just a one-time thing, a good day, so we try not to get too excited or put pressure on them to be that ‘good’ or better the next day. We take the little victory, have a yay for her moment, and move on. This morning she did well also.

From what we know, Lady’s management at the zoo was hands-off: she wasn’t touched. This is smart when working with an elephant that has hurt people in the past, especially when your facilities aren’t designed to do so safely. Touch is new for her and something she will have to get used to so we can do what is needed for her feet. During her treatment, we always hose off her back feet and wash the abscess on her face (which is doing very well). Today, because she was again relaxed, Scott took the bathing opportunity to try and wash underneath her back feet when she lifted them or shifted her weight, and used the hose to touch and rub her legs as he did. She was phenomenal, no dirty looks, (yes we get those), and no intensity to her gaze.

So although it’s easier to write shorter posts with cute photos and say Lady is doing great, those who know us know that’s not how we function. Transparency is everything to us, and we feel we do a disservice to elephants if we don’t tell the full story- the one that shares that sometimes it’s not easy. They have to work at finding their joy and trust again. Like someone who was in an abusive relationship for decades, being with a nice partner doesn’t make all of your fears and insecurities go away. You have to be willing to work on yourself if you genuinely want your heart to heal. Lady is still smiley, silly, and playful, but she has a past that she needs to work through. And the good news is that Lady seems to be willing to do just that.

READ MORE ON THEIR PAGES:

Your ticket for the: Finding Their Way Back to Themselves Is a Journey

Finding Their Way Back to Themselves Is a Journey