Everyone Goes Exploring In Unexpected Places 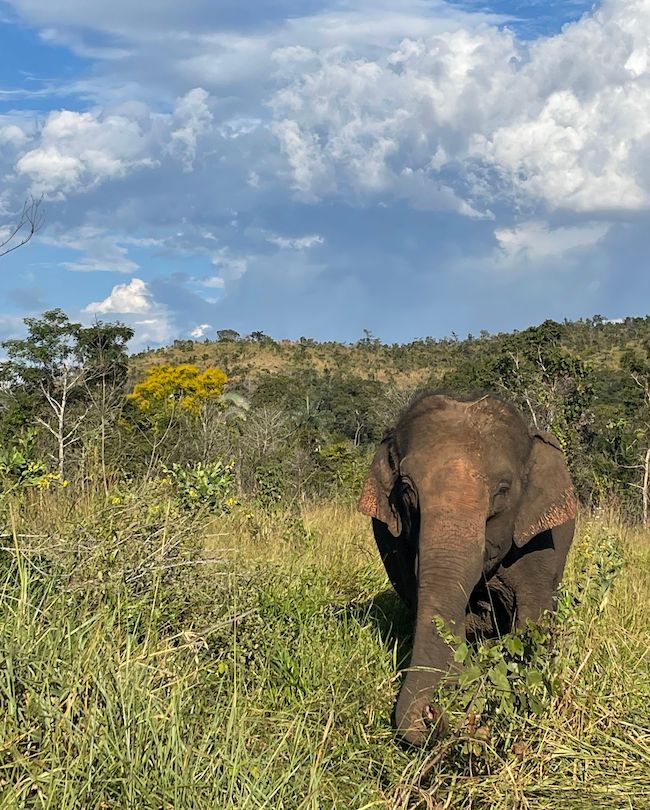 Most of the elephants here at Elephant Sanctuary Brazil have spots that they enjoy in each yard. Sometimes they get into a pattern of staying in the same spots at roughly the same times of the day during particular parts of the season. Out of practicality, there are some things here that have a bit of a routine schedule – particularly mealtimes. But all of the girls can choose to do whatever they want, whenever they want, even if that isn’t what we expected at all. It’s part of what keeps things interesting around here.

When Mara eats in the chute at the barn, she generally spends a little bit of time in Yards 1 and 2, having some hay before heading out. But on this particular day, she left almost immediately to head back into the larger yards. Just a little bit later, Scott drove through the habitat to find Mara, to put out her evening hay and supplemental produce, and instead found Bambi hanging out happily by herself at the pond. But still no Mara.

Turning the corner, he saw yet another elephant he didn’t expect to see: Maia, who, sometime after dinner, had walked back across the creek into Yard 4. Perhaps she is catching on to the fact that Mara gets an extra snack in the pasture and sneaks over to get a few bites. Clearly we couldn’t put Mara’s food down there, because it would become Maia’s food.

So Scott drove back by the pond to find that Bambi was no longer there. He ended up putting the food at the end of the road in Yard 4, where Mara and Bambi showed up to devour it (even though that was supposed to be for later). We’re not sure where Rana was during this time, but she did eventually catch up with her friends and there was lots of trumpeting and rumbles.

Maia spent time on one side of the habitat and, in the span of ten minutes, ended up ¾ of the way across the habitat, to the other side. Crossing through a space she was sharing with the three other girls shows her comfort level continues to grow. And, of course Lady was out doing what Lady loves to do – finding nice quiet spots to graze.

All of these wanderings show that each elephant takes advantage of the space that sanctuary allows them – making time for themselves, and simply exploring all the places they want to go. It’s a pleasant reminder of just how large and wonderful the property is.

Your ticket for the: Everyone Goes Exploring In Unexpected Places

Everyone Goes Exploring In Unexpected Places