Elephants Connection to the Land 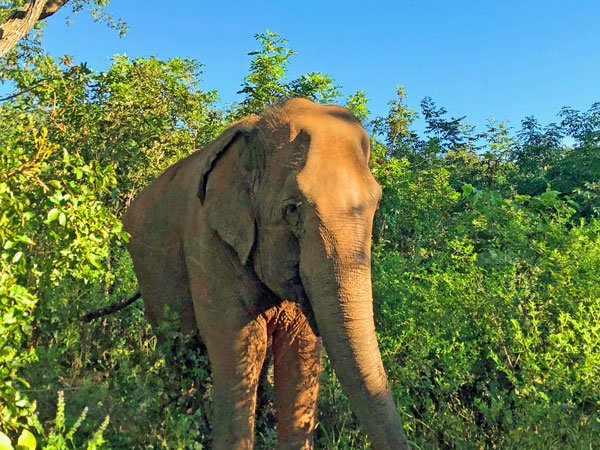 People frequently ask how the elephants know to eat off the land and provide for themselves.

We have been asked this by zoo officials, zookeepers, and laypeople alike. They worry that after not seeing or experiencing grass, vines, or trees up close for decades, the elephants literally won’t know what to do with them.

No matter how many years we work with elephants, they continually remind us (often humorously) to never underestimate them. They repeatedly impress us with their clever ingenuity, resourcefulness, and connection.

When Ramba first arrived at the enclosure in the Chilean Safari Park after years with the circus, living on a cement slab, she completely ignored the fresh fruit scattered around for her and starting picking grass to eat. When new elephants first arrive, even before they leave the crate, they frequently try to reach through the transport container’s side doors and start grabbing grass or vines as soon as they see it. Irrelevant to what their life has been, and how long since they’ve experienced nature, they never lose that connection with the natural world.

The shifts in behavior we witness during season changes are another example of their connection to land and nature.

As we transition from the wet season to the dry season, different vines & plants begin to grow. Trees are in different growth stages than they were a few weeks ago, and the elephants adjust where they spend their time. It isn’t related to shade as there is both shade and sun available almost everywhere they go. It isn’t related to water as it’s still raining, albeit less, the creeks are at their fullest, and there are water troughs throughout the habitat. The only thing that has shifted is the season, and where the elephants spend the bulk of their time.

We don’t see what they see and understand. We can’t tell you why Rana prefers the pasture she is at right now – it looks the same to us. What we can tell you is that after months of not caring about that pasture or that grass, it’s suddenly Rana’s favorite place to be and graze. We don’t know why, but there is a change that she is aware of that we are not.

As humans, we don’t have the level of connection with the land that the elephants do.

It doesn’t matter that Rana was a circus elephant for 40 years, she just knows. She hasn’t had access to this property or its natural varieties of grass for decades. She simply has an innate connection with nature and with her surroundings – one that few people have and most can never truly understand.

They seem to know what to eat and when to eat it. It demonstrates that with all of the ‘elephant’ that has been stripped of them after decades of sterile captive lives, the core of who they are remains beautifully intact.

Your ticket for the: Elephants Connection to the Land

Elephants Connection to the Land