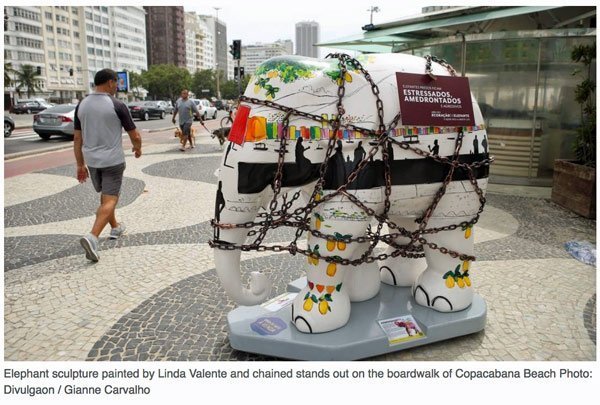 Brazilian article on Elephant Parade and the elephants that Amarula has sponsored for Elephant Sanctuary Brazil. There are many elephant statues, but these seven are all chained to draw further attention to the plight of captive elephants in an attempt to educate those who may not realize the impact of captivity.

RIO – A herd of elephants has taken to the streets of Rio on Thursday morning. 66 sculptures of elephant babies painted by names like the cartoonist Ziraldo are part of Elephant Parade. As reported by Ancelmo Gois in his column on Tuesday at GLOBO, seven of them were chained to draw public attention to the ill-treatment suffered by the animals.

“The elephant problem is not currently on people’s radar. In the world, every 15 minutes an elephant is killed for their ivory, and in Brazil, many are still suffering in captivity. The purpose of this action is twofold: to give visibility to this important cause and to support the NGO Elephant Sanctuary Brazil, of which we are partners, in collecting funds to rescue elephants and take them to the project headquarters in Chapadados Guimarães, Mato Grosso – says Theo Leal, Marketing Manager for Latin America at Distell, the Amarula liquor company, which is responsible for the action alongside the NGO elephant sanctuary.

Your ticket for the: Elephant Parade Rio 2018