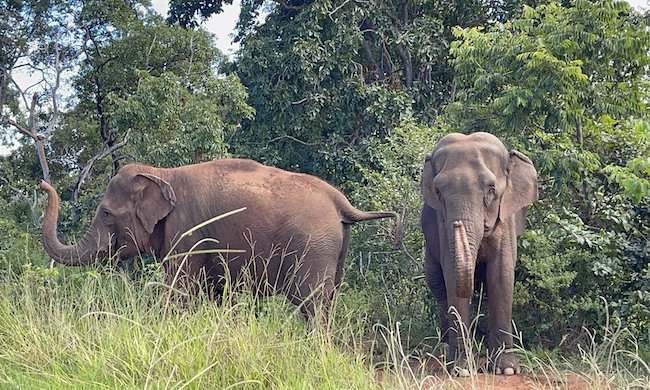 While Bambi has settled at sanctuary in terms of the relationships with other elephants and appreciation of the land, she doesn’t have the same depth of bond yet with the humans here. Though she likes her humans, the relationship tends to be a little superficial. She sees humans as more of a source of food than a source of affection.

One recent day, Scott and Mateus worked with Mara in the chute while Kat was along a nearby fence with Rana and Bambi. Mara was wrapping up in the chute when Scott glanced over and observed Kat and Bambi having a moment. Bambi was calmly leaning in along the fence, and Kat was rubbing her belly. This moment was the first time Bambi seemed to offer her caregivers a moment of intimacy. It happened very organically; Kat saw that Bambi was leaning in, relaxed, and receptive. Kat responded to Bambi’s body language with touch, and Bambi continued to be open. Once Scott realized this was happening, rather than having Mara leave the chute since she finished eating, he stepped back from Mara. This kept Bambi from being distracted – as we all know, Mara is quite adept at getting the attention of her friends, particularly Bambi. These sorts of small, natural moments are the ones that often allow for the most significant amount of growth.

We talk about respecting elephants’ time and space, and we can only honor that if we pay attention to the signs they offer. In this case, it was not just Kat’s understanding that Bambi was receptive to her belly being touched, but also about Scott’s awareness that he should adjust what was happening with Mara so the moment would not be interrupted. That allowed Bambi and Kat’s interaction to continue and evolve organically.

A documentary crew recently contacted us about filming here. Before we could agree to anything, we had to explain the parameters for filming. Everything needs to happen on the elephants’ schedule, but their schedule changes day to day, moment to moment. After days of rain, there could finally be perfect lighting, with the elephants in the ideal location. Still, we won’t allow filming if we see something in the elephants that made us pause. It could be anything, not just an elephant having an “off day,” but also an elephant having a good day. We wouldn’t want to interrupt an elephant who was more relaxed or receptive than usual any more than we would if they were in a bad mood or having a hard day.

It’s challenging to convey the “why” to people who don’t understand elephant behavior – and the concept of sanctuary. Sometimes it’s only a gut feeling leading us to intuit what is right or wrong in that moment. It’s important to honor those feelings. Our respect for “elephant time,” even when it disappoints a photographer or video crew, shows the elephants that someone is listening. That is what sanctuary is all about.

Photo of Bambi facing the camera, with Rana to the left, facing out

Your ticket for the: Elephant Behavior and Human Intuition