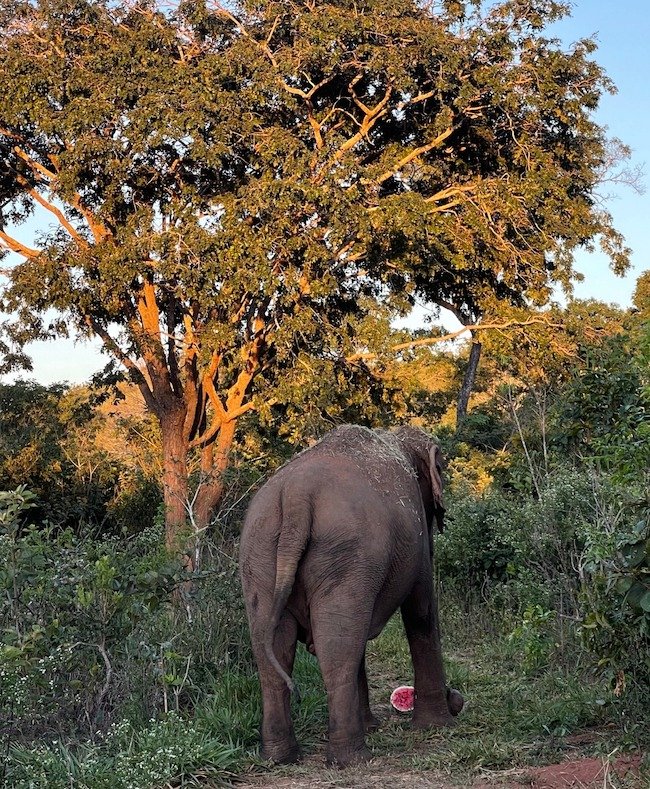 Elephants are anatomically equipped with built-in tools on their bodies to help them navigate through day-to-day life. We’ve talked about the power of trunks and how they are used for both tactile and sensory reasons, but today we’ll be diving into the functionality of their tails.

Elephants cover their bodies with sand and mud to protect themselves from both the sun and insects, but the tail acts as a flyswatter, keeping bugs away from the back end while their ears flap the bugs away at the front. The tails are also covered with coarse, black hairs that can reach up to almost 100 centimeters, which also helps with insects. Research has shown that the hair on the tail of elephants, composed of keratin, is quite different from the hair on the rest of their bodies, and is similar to the horns of rhinoceroses or horse hooves.

Tails are also used for more than swatting insects. Female elephants often use their tails to feel around and check for calves to make sure they’re still following behind. Like a mother holds the hand of her child, a calf can also grab on to their mother’s tail for guidance or even comfort. The tail can be used as a disciplinary tool; elephants do not hesitate to give a swift and forceful swat at other elephants if necessary.

At Elephant Sanctuary Brazil, most of the elephants don’t have tail hair, which is common in captive elephants. Some captive elephants also have broken tails either from elephant confrontations (mostly biting) or abuse by humans (who break their tails in retribution for “bad” behavior). Lady is the only elephant here who came with hair on her tail, and a very long, beautiful tail at that. This year, Rana started to grow hair back on her tail, which is something we’ve never seen before. She only has about a dozen or so of sparse hairs, but it’s still her own little mini miracle.

Your ticket for the: EleFact Friday: The Multi-Functional Elephant Tail