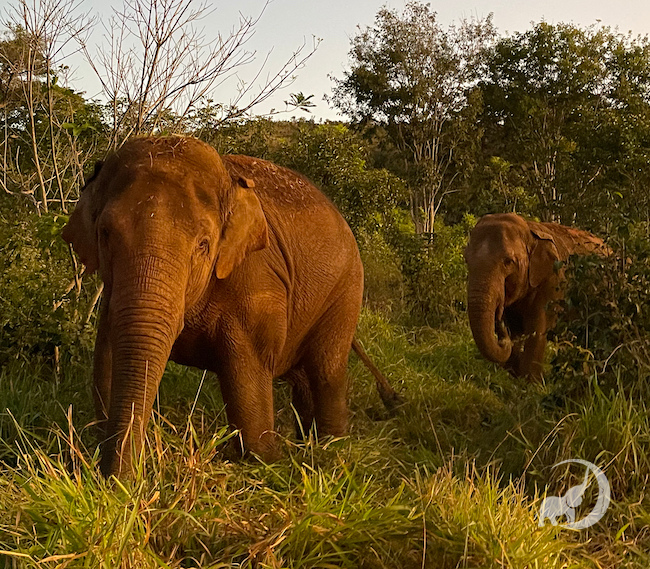 Since Pocha and Guillermina’s arrival at sanctuary, we’ve shared a little bit in video and text about some repetitive behaviors they have shown. Today, for EleFACT Friday, we want to speak a bit on this and explain what stereotyping behavior means.

Stereotypic behavior is a self-stimulating, repetitive physical movement that elephants exhibit and develop as a response to stressors or an unstimulating environment. It’s possible that you have seen videos of elephants stereotyping without even recognizing the behavior; movements like weaving, pacing, or swaying repetitively in a way that is often labeled as “dancing” are all telltale signs. Pocha and Guillermina, for example, who spent decades living in an environment with very little outside stimuli, have exhibited this behavior, which is unfortunate, yet understandable. This behavior can also be a way of managing stress. For example, upon their arrival at sanctuary, the two girls were suddenly experiencing senses and sights that they had never seen before. As exciting as this was, it was overwhelming, and still can be after a month at sanctuary. We see some of these behaviors present themselves currently, especially in Guillermina.

It is more than normal for these behaviors to persist even after elephants are removed from their sterile or harmful captive environments, although stereotyping has been known to resolve fully or partially at sanctuary. The good news is that we have seen none of this behavior from Pocha since a couple of days after arrival and significantly less of these movements from Guillermina, specifically since she has become more acclimated to sanctuary and has expanded her social circle and explorations; but it is a coping mechanism that she has used for years and will take time to work itself out. This also serves as another reminder of how brave she and her mother have become over the last month – which is so much to take in. We are continually amazed by the steps they have taken physically and emotionally in the face of so many different stimuli and experiences.

Photo: Guillermina in front, Pocha in the rear

Your ticket for the: EleFact Friday: Stereotyping Behavior