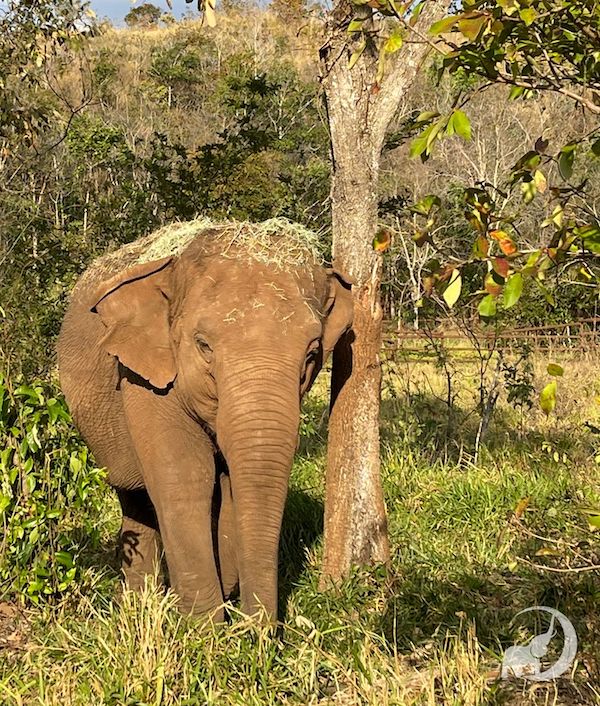 Because most people have observed elephants exclusively in captivity, it is easy to think that a more rotund elephant is normal when, in fact, that elephant is overweight. The elephants at sanctuary are at a weight that’s closer to what is appropriate for their species. Both Pocha and Guillermina arrived at sanctuary with excess weight to lose, and Guille needed to lose significantly more than Pocha. As a result of an appropriate and natural diet and moving about the habitat, Pocha is getting close to what would be a healthy weight. Guillermina, however, still has a bit more weight to lose in order to be considered within a healthy range.

According to studies, obesity in captive elephants can cause problems with heart disease, arthritis and foot issues, and ovarian cycle abnormalities. Results of these studies showed that approximately 74% of zoo elephants are overweight. Female elephants also experience weight problems much more often than males, with Asian elephants having a higher risk of being overweight or obese than African elephants.

There are several reasons why so many elephants were classified as being obese or overweight – two of the most important being the amount of walking that elephants participated in and the regularity of their feeding schedules. As you would expect, elephants who had a longer period of walking scored lower on the obesity scale. But elephants who had a regular feeding schedule scored higher on the scale. That might seem surprising at first but, in nature, elephants browse and graze throughout the day; they don’t eat on a pre-planned schedule – so eating on a timed schedule goes against their natural behaviors.

These findings were backed up by various exam techniques, including visual observations, using ultrasound to measure fat thickness, and determining triglyceride levels of the elephants. All of these testing methods led to the same conclusion: elephants in captivity had a high tendency toward being overweight or obese.

Now that Pocha and Guillermina are at sanctuary, their natural grazing – on their own schedule – and plenty of movement around an abundance of land should make a big difference in their weight. It may take more time for Guille to reach a healthier weight than for Pocha, but she is making gradual progress and that’s a good thing.

Photo of Guillermina in Yard 4

Your ticket for the: EleFact Friday: Obesity in Elephants