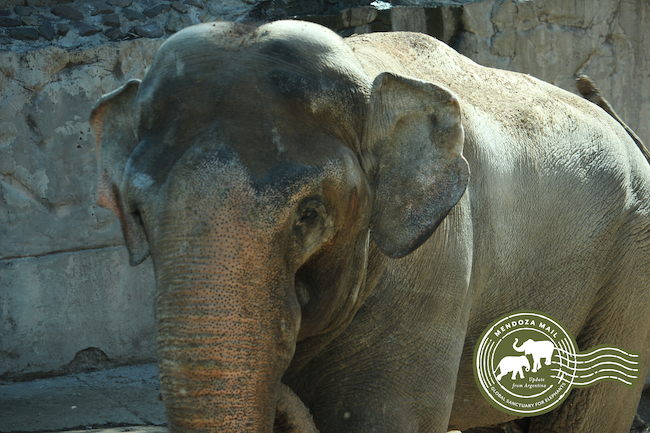 Happy EleFACT Friday. Last week, we talked about the difference in reproductive ages between male and female elephants and touched on how this would affect Pocha, Guillermina, and Tamy when they come to sanctuary. Today we wanted to dive a little bit more into Tamy, why he needs a dedicated space, and may not be integrated into the Asian female habitat full time.

As with all elephants, Tamy’s comfort and healing are the most important parts of bringing him to sanctuary. But because he is a male, what that looks like may be very different than what we’ve experienced with females. While science has shown males are not the loners people once thought, they do tend to spend most of their time with other males. Since, in the wild, Tamy would spend some time around females, the goal is to find ways for him to safely and properly socialize. This is very dependent on his personality once at sanctuary, his emotional growth, compatibility with others, and the willingness of the female Asian elephants to spend time with him. Tamy’s response to going through musth will also be a factor. Although some males become aggressive, others do not. Regardless, he deserves his own space and bigger, stronger fencing during that time. He is a large male and his stronger, reinforced habitat is a protective measure for him, the other residents, and his caregivers; as always, we prepare for the worst and hope for the best. In truth, some males prefer to be alone during musth and Tamy may prefer this approach.

Most of our residents are not of breeding age, but that does not mean that Tamy would not attempt to breed them. Elephants like Lady, who have significant physical traumas, would be incredibly compromised if a full-sized bull elephant attempted to mount her. As we talked about last week, we cannot put the elephants who are working on their own healing in harm’s way or impede their progress by integrating without preparation.

Some of our females may be open to having a male in their habitat, but some may not. We won’t know until that time comes. Truthfully, if Tamy approaches a female elephant in a way that makes her comfortable, she might prefer his company to that of the other female elephants. But, again, we have to plan accordingly. Individual personalities and situations will dictate what happens. Our comprehensive facility design allows for different approaches to initial socialization and sharing spaces. Our approach is always to allow the elephants to share their needs with us, rather than imposing our ideas of how we think things should go.

As we mentioned in a prior question and answer post, the female Asian habitat and male Asian habitat will have a corridor connecting them that we can use, should the situation be appropriate. There is already a gate in place on the west fence of the female habitat where the two spaces will be connected, but may not be open for free roaming unless the time is right, if ever. It allows us the same flexibility that we have built into our existing habitats. If Pocha and Guillermina are interested in being near Tamy, we can open that connected area and see how they respond to one another; remember, Guillermina and Tamy have never shared a space together. So, we will have options for building relationships between the three, who have spent years near one another, though not in the same enclosure. Once they are all acclimated, being close to one another may bring them comfort. Or Tamy may find that, with space, mental stimulation, and his own healing journey, he takes a more typical role of an elephant father, which means not having much of a relationship with his offspring at all.

We will always listen to and respond to all of our elephants and do everything we can to keep them safe, happy, healthy, and allow them to live out the rest of their lives enjoying the sanctuary they deserve.

Your ticket for the: EleFact Friday: Everyone Needs Space to Heal