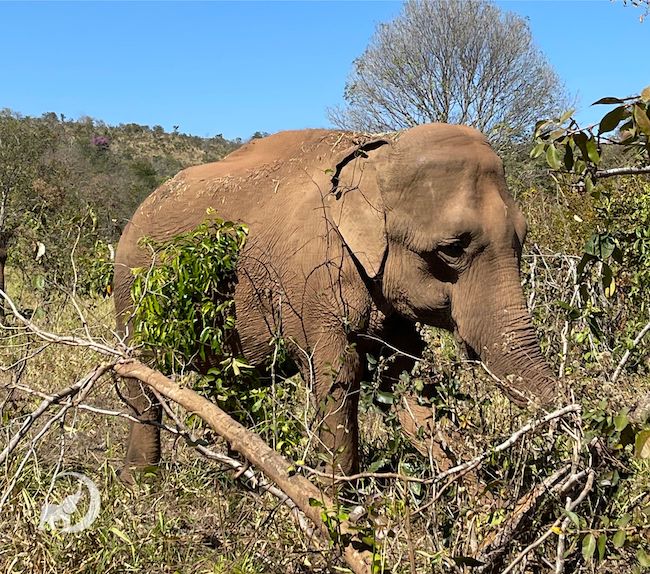 We often talk about elephants grazing or eating meals here at sanctuary. So, for this week’s EleFACT Friday, we are going to talk about just how much elephants eat in a day and why. The elephants here browse on grass, vines, roots, and trees, among other things. We also supplement those meals with hay and produce. (As we have explained before, this is so that we can monitor appetite and look for any health or behavioral issues that we may see while observing them.

One of the many reasons it is so important to have large amounts of space for the elephants to roam is the fact that they eat during most of the day. They normally graze between 15 – 20 hours per day, which is why large spaces are essential for allowing elephants to eat for the amount of time and get the amount of nutrition they would in the wild. They can ingest approximately 150kg (330lbs) of natural browse in a day. That amount can vary, depending on factors like seasonal droughts and availability of plants to graze on, but the elephants here have plenty of access to water, so their appetite isn’t impacted by things like hot temperatures.

Because elephants are so large, they need a lot of energy to sustain themselves. Additionally, they roam the habitat all day (or cover large distances in the wild) which requires food to keep going. However, the main reason they eat so frequently is because the majority of the food they ingest goes undigested. In other words, their bodies are always in need of energy. Only about 45-60% of the food elephants eat is actually digested, The remainder makes its way out of their system through dung – so they don’t get the benefit of the nutrients from that food. Because of the amount of space we have at the sanctuary, elephants move around enough that natural sources of food have time to replenish themselves before elephants search them out again.

Photo of Mara enjoying some browse in the habitat

Your ticket for the: EleFact Friday: Elephants Graze All Day Long