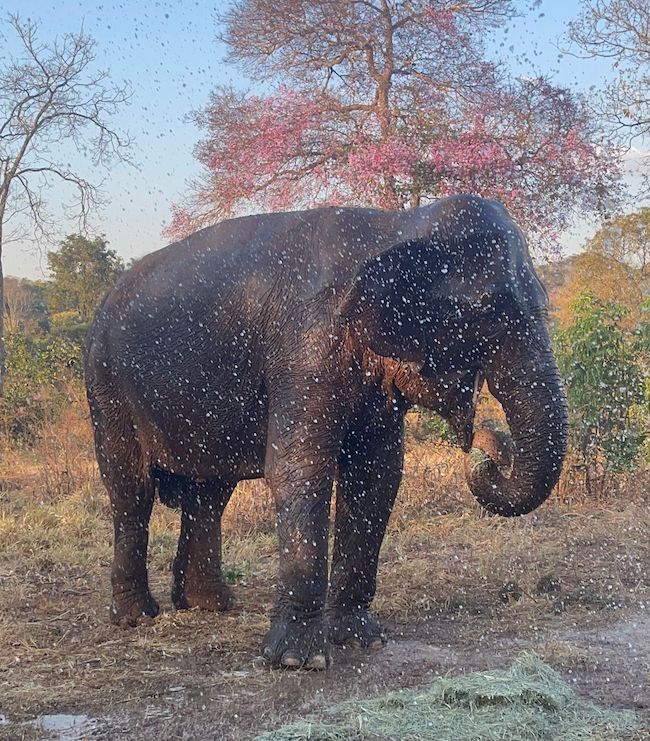 Here in Brazil, we’re nearing the end of our dry season. For today’s EleFACT Friday, we want to examine how elephants behave in the dry season in the wild versus here at the sanctuary.

Most African elephants live in the savanna, similar to the upper habitat here at Elephant Sanctuary Brazil. As you have seen in pictures, the environment is grassy with trees. In the savanna, there is rain for six to eight months followed by four to six months of no rain, which is similar to what we’re experiencing now. This drought can sometimes lead to fires, which burns through vegetation that will grow back during the rainy season.

On the savanna during the dry season, elephants eat leaves, twigs, and bark where they can find it. This is true for the elephants in sanctuary as well; the habitat here provides enough vines, branches, and patches of green grass, although we supplement with a larger amount of hay.

The dry season affects the migratory patterns of wild elephants as well. African elephants typically migrate at the beginning of the dry season, between June and November, to head to more plentiful areas near rivers and water sources that may not dry out as easily. During a prolonged dry season in Africa, elephant migration distances have been recorded to extend over 100 km (62 miles). Studies documenting Asian elephants in deciduous forests of southern India, with numerous water sources, reported elephant migration of between 20 and 50 km (12 and 31 miles).

Elephants will dig to find water sources regardless of season, but that can be especially helpful in the dry season. By digging into dry stream beds, they can uncover water that is below the surface. Using their feet, tusks, and trunks, they may expose deeper wells of water not only for their own benefit, but for the benefit of other animals as well.

Photo of Bambi, cooling off with the hose during dry season

Your ticket for the: EleFact Friday: Elephants During the Dry Season