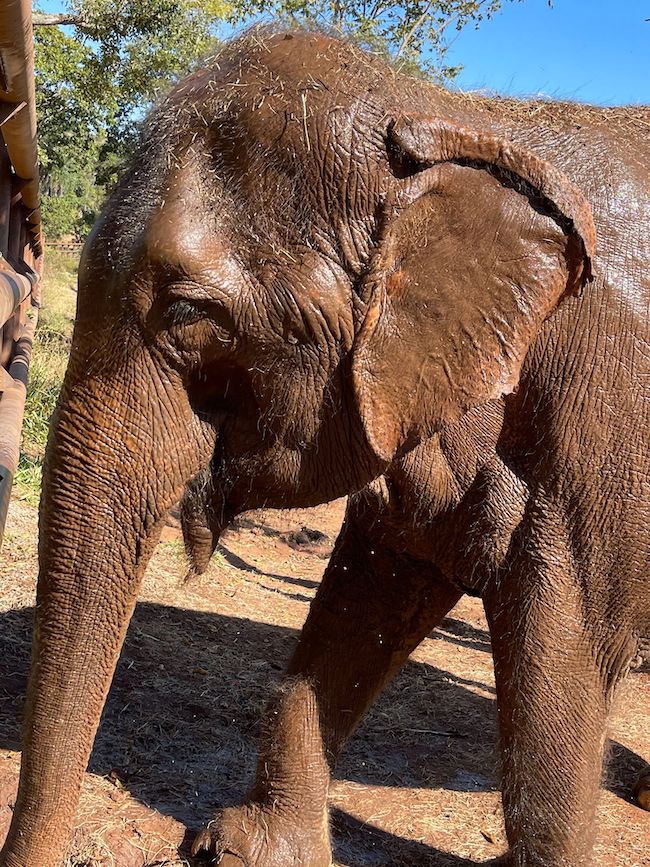 I’m sure you have noticed that some elephants, like Maia, have fuzzy heads, while others, like Bambi, have smooth heads. Some have asked why that difference exists, and the answers are relatively simple: genetics and, especially for elephants who have lived in captivity, healthy skin. Much like humans, who have different types, colors, and lengths of hair, elephant hair is unique from one individual to another. They can grow and lose hair with age, too. Captive elephants who do not have the opportunity to care for their skin in a natural way (dirt, mud, dust, bathing, trees) may build up layers of dead skin, which can prevent normal hair growth. But elephants also have hair that you can’t necessarily see at first glance.

Most elephants have smaller hairs all over their bodies. It may be sparse, but there can be quite a lot of it. Because elephants are massive, they create a lot of heat just by existing – since organs produce heat constantly. They don’t have the ability to release heat through their skin, since they don’t sweat, so they tend to hold heat in their bodies for long periods of time. That is why they fare well during cool nights here at the sanctuary – because their bodies release heat slowly. In order to prevent overheating on hotter days, elephants have developed physiological and behavioral ways to control the heat in their bodies. We’ve talked about how elephants can use their ears to cool their bodies, and they also spray themselves with water, take mud baths, or hang out in the shade during hot days. But we have begun to find out that those tiny hairs on their bodies are not there to keep the elephants warm, as we see in other animals, but rather to keep them cool.

What science is discovering is that the tiny hairs on an elephant’s body helps carry heat away from the skin. A study done at Princeton estimates that, when the hairs catch a breeze, they can enhance their body’s ability to lose heat by up to 23%. It effectively creates a larger surface area for heat to be released and actually pushed away from their bodies.

So, even though you may not see much visible hair on some of our girls, they all have some and it plays a vital role in their day-to-day existence.

Photo of Lady and her fuzzy head

Your ticket for the: EleFact Friday: Cool Hair