EleFact Friday: A Noise By Any Other Name 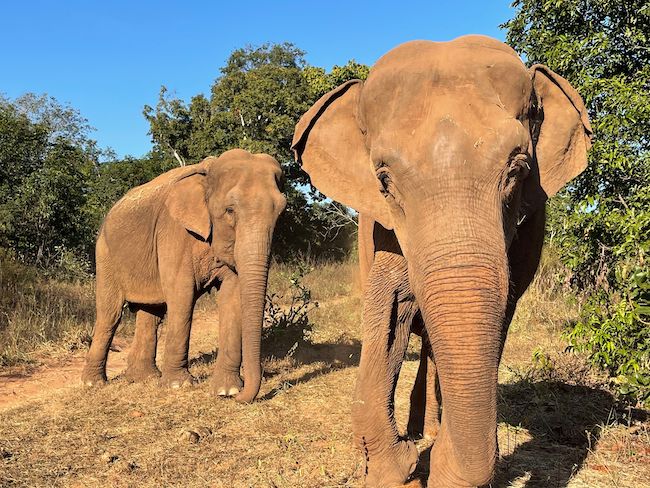 Happy EleFACT Friday. This week, we are going to explore the types of noises that elephants make and how they make them. Elephants produce a wide variety of sounds, and each can mean different things to different herd members (or humans in sanctuary). The sound many people often associate with elephants is trumpeting. However, elephants make many different noises, including rumbles, squeaks, raspberries, whale songs, trunk pops, and even roars. The elephants at Elephant Sanctuary Brazil primarily communicate using rumbles, but there is also plenty of trumpeting and squeaking.

When elephants trumpet, they are pushing air through their trunks. Most mammals make noises using their larynx, or voice box. Elephants do that as well, but not when trumpeting. There are a number of reasons that elephants might trumpet and some trumpets occur in the wild more often than in sanctuary. It is a sound made when an elephant is highly stimulated – whether that means excited and playful, or lost, surprised, or angry.

Rumbles are perhaps the most common sounds we hear at sanctuary and appear to have the widest range of meanings. These low frequency sounds get their name from the once-believed thought that the noise originated in the elephant’s digestive tract, like stomach rumbles. In fact, elephants rumble the same way people talk or sing, by blowing air past their long vocal folds and letting them vibrate. These folds are the largest to have been demonstrated to make sound in this way. Rumbles can be used as a greeting, to soothe, to express contentment, and sometimes to intimidate. A rumble has the ability to travel very long distances because of the low frequency at which they are produced – in some cases, many times lower than the human ear can perceive. Elephants can judge how far away they are from one another because of how their rumbles travel through the ground, allowing herds in the wild to communicate valuable information and to have conversations. We compare gentle rumbles to a deep cat purr.

You can hear some samples of vocalizations on our website here. The organization ElephantVoices has created an “Elephant Ethogram” that catalogues the behaviors of  African elephants. However, you can hear examples of elephant noises in their database, if you want to hear more.

Photo of Bambi and Mara

Your ticket for the: EleFact Friday: A Noise By Any Other Name

EleFact Friday: A Noise By Any Other Name