Early Dinner: The Girls Say No 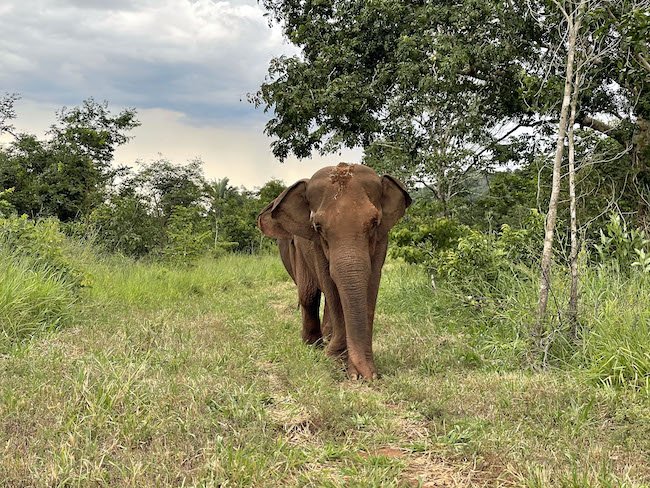 Things in life rarely go as planned. At sanctuary, you have to be even more flexible than in “real life.” We do our best to plan and prepare for anything, but the elephants are often our guides – and the elephants often have other ideas. We have learned to accept it, occasionally even finding it hilarious.

The land here is very wild and natural; it’s great for the elephants and the humans like it, too. Like any wild space, we have our fair share of bugs, although fewer than people would think. We make a natural bug spray for the elephants that seems to work effectively. But because elephants don’t have bug spray in the wild, they have their own bug management techniques, such as hay throwing, dusting, and submerging in ponds. Regardless of where anyone is, the annoying bugs come out at dawn and dusk. Because Mara’s meals can take longer (due to her selective and sometimes slow eating), her meals have been falling at peak gnat time.

To try to avoid a bug swarm – since it can distract Mara and slow down her eating – we decided to see what would happen if we started feeding the girls dinner a half hour earlier. We quickly learned the elephants had different feelings.

Since the elephants know when dinner typically happens, they tend to make themselves easier to find at mealtime. The first day of the new schedule, when Mateus went out to feed them he found Rana but didn’t see Bambi or Mara. Occasionally, the three will come towards the barn for dinner, so he wondered if they were heading that way. For safety, caregivers generally don’t drive in the middle of the habitat with the elephants. When Mateus couldn’t find Bambi or Mara along the perimeter fence, he closed a few gates so he could drive along additional fences looking. When he still couldn’t see Mara and Bambi, he radioed to Kat, who was at the office. Kat checked the security cameras and saw a tail swinging in the brush west of the pond in Yard 4.

Once Mateus knew where they were, he went to the fence nearest to their location. By now, Rana had wandered to where the other two were, so Mateus called for all three, ensuring they knew he was there with dinner. He waited and, as Kat continued watching, after about 30 seconds the three ladies all popped into view. The fence wasn’t a far walk from the elephants’ location, had they felt motivated enough to move. So Mateus waited. About ten minutes later, they still hadn’t started heading toward him.

When those three elephants are together, most anything can escalate into a party. It’s especially prone to happen when everyone is in a sleepy, grazing mood and one of the three decides to move at a normal pace. The moving will cause someone to rumble, making someone else rumble, which causes someone to trumpet, which sets off the entire party of vocalizing, smelling, and touching. In the process, nobody actually moves.

Mateus hung out near the fence until the three finally decided to come over for dinner, which ended up happening right at the usual dinner time. What is it they say about the best laid plans?

Your ticket for the: Early Dinner: The Girls Say No

Early Dinner: The Girls Say No