Do Elephants Prefer One Caregiver Over Another? 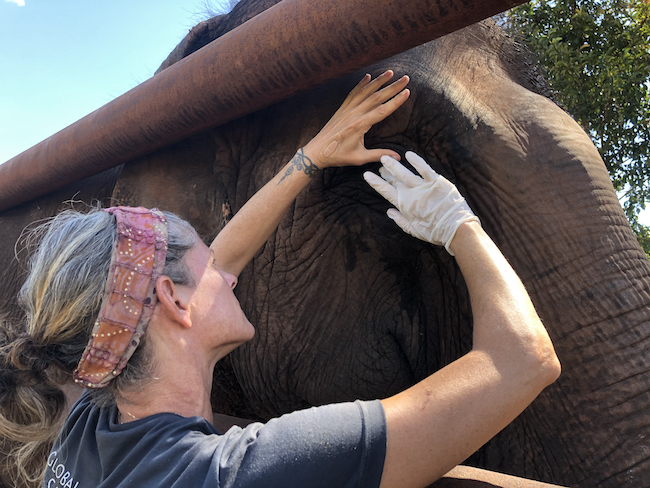 We get a number of questions about whether caregivers have “favorite” elephants (which Scott and Kat talked about in the AMA video) or if elephants have people they prefer over others. Truthfully, the answer is: yes and no.

Due to an elephant’s past, he or she may positively respond to people in general more quickly than others. Additionally, they might behave differently with one specific caregiver, particularly in the early days of their training at sanctuary. An elephant may resonate with a particular individual because of the amount of time they spend with that person. For instance, Kat has done a significant amount of care with Lady, so Lady tends to be more open with Kat than other caregivers. As Lady has become more comfortable at sanctuary, she has begun to open up to other people, but that is an ongoing process.

Some elephants might be emotionally drawn to a specific person when they are sick because they associate that individual with feeling better. Other elephants can be one-person elephants, though that isn’t the case here. Sometimes, an elephant might connect with a particular individual on a personality level. In Rana’s case, she works well with all caregivers, but clearly has an affinity for Scott. Her temperament changes around him, but he doesn’t necessarily treat her any differently than he does the other elephants. As far as the rest of the ladies here, they don’t necessarily prefer one person over another.

It’s true that elephants can respond differently to different people, which is only natural. They seem to know who has more experience working with elephants and who doesn’t yet have the depth of understanding. But on a larger level, as they heal emotionally, they tend to open up to those who show them consideration and a willingness to listen. Yes, each elephant has specific nuances that must be learned but, as a general rule, they know very quickly which people acknowledge that they are a unique being.

How one talks to an elephant, responds to their behaviors, and simply shows respect for what they have gone through makes a significant difference in how an elephant reacts to a person, or to people in general. While respect and caring may sound simple, it’s deeper than that, and Rana is a great example. It’s easy to get lost in how beautiful and cute she is, but if you view her primarily through that lens, she won’t respect you. Likewise, she will not respond well to you if you see her as this “wonderful and good” girl – which she is, but she’s also more than that. As with everything in life, there is a definite balance that must be found.

There will always be some elephants that develop comfort with one person more quickly than others. But here at ESB, though elephants like Lady and Rana may show a preference, they work with all caregivers, and the rest of the elephants appear to have an equal respect for both Scott and Kat, and a growing respect for the others who care for them.

Photo of Kat and Maia

Your ticket for the: Do Elephants Prefer One Caregiver Over Another?

Do Elephants Prefer One Caregiver Over Another?