Differences Between Guillermina and Pocha 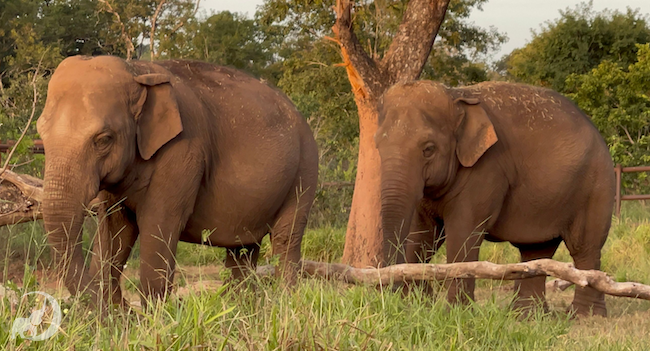 Now that you’re learning more about Pocha and Guillermina (and you know how to pronounce their names), let’s take a look at some of the physical characteristics you can use to tell them apart from each other – and eventually to distinguish them from the other elephants.

Pocha is the thinner of the two elephants, though both could stand to lose some weight (significantly so with Guille); Pocha’s face is also thinner than Guillermina’s. When looking at Pocha’s ears, you can see that her right ear folds backwards, while the left ear has a forward fold. Both of Guille’s ears have a forward fold.

Guillermina is a plump girl and taller than her mother. Her head is rounder and she has puffy eyes. Unlike Pocha, Guillermina has a very hairy tail: the end of her tail is the hairiest of all the elephants at Elephant Sanctuary Brazil. But, quite frankly, her most prominent characteristic is her sheer size.

Personality-wise, Pocha seems to want to explore on her own some, but Guillermina sometimes calls her back when she walks too far away. Pocha was also the first to explore the mud wallow, while Guillermina declined to follow her mom’s lead. At the ecoparque, Guillermina could be controlling and disrespectful toward her mother at times, wanting to be in charge of what they both were doing. We are beginning to see hints of that behavior emerge at sanctuary, which is showing us exactly how patient Pocha can be. Though Guille has been sheltered for her entire life, that doesn’t make her meek. She has a lot to learn about how to have a healthy relationship, as she gradually eases into a larger group of elephants. Guillermina and Pocha’s personalities – and their bodies – will change and evolve as they spend more time at sanctuary.

Your ticket for the: Differences Between Guillermina and Pocha

Differences Between Guillermina and Pocha