Despite the Wildfire, Life Is Evident 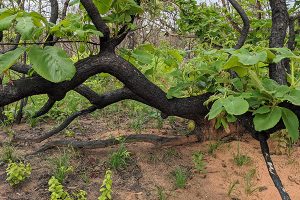 The African Habitat has two phases of construction. The first phase is the barn itself and Yards 1–3, which we are currently working on. The first three yards are enough space to bring home the first three rescues (Kenya, Kuky, and Pupy). The second phase will be two additional large yards, but will not happen immediately after. This methodology is the same way we constructed the Asian Habitat.

African elephants tend to be a little harder on their environment than Asian elephants, which is a polite way of saying that African elephants really enjoy pushing on trees. Despite being an Asian, Maia was the same when she arrived. Some of it was due to her personality, but she also had a lot of pent up energy from being chained for five years. She had a lot to process, and she processed it by knocking down palm trees. We expect the African elephants will be the same way as they knock down trees in the wild. They also eat trees differently than Asian elephants. Along with eating much larger limbs, they will also strip the bark, causing some damage if they return to the same tree repeatedly. The first three African elephants we hope to rescue aren’t currently chained, but they have decades worth of this natural behavior that they haven’t been able to express. When we designed the habitat, we set it up so the first three yards have fewer substantial trees and more pasture. The denser forest is in the expansion to protect trees from the first bliss of “I can knock down trees!” We plan on building fences around the best shade trees to ensure they aren’t damaged and can provide shade for years to come.

The first three yards, as well as the future expansion, burned during the wildfires. Since the first three yards where Kuky, Pupy, and Kenya will live their first few years didn’t have many large trees, that land is mostly regrown. The grass is back and beautiful. The spread-out trees seemed to survive as the fire burned cooler and faster, with mainly grass burning. The massive canopy of the shade trees means the grass is sparse around the trees, which provided less fuel. This, in turn, protected the large trees. Small trees are shooting up everywhere in those yards, and life is evident. By the time the first residents arrive, there will be almost no evidence of the wildfire in their new home.

Unfortunately, the heavily wooded sections of the expansion didn’t fare as well. The dense trees provided fuel, and the fire burned hot. Many trees were lost. Many more trees are leaning, and we aren’t sure if they will survive. Many more, like the one pictured here, fell over entirely.

Beautifully, though, there is life everywhere. This tree is covered in new shoots of the same tree, and it is one example of many. Like a phoenix rising from the ash, the land will regrow in time.

Your ticket for the: Despite the Wildfire, Life Is Evident

Despite the Wildfire, Life Is Evident