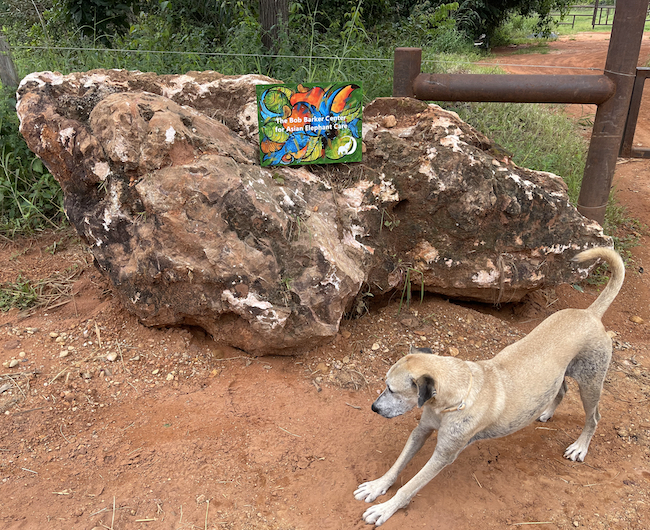 Beginning in 2016, as we were making arrangements for the first phases of the female Asian habitat – preparing for the arrival of Maia and Guida – and making the initial land payments, we received a generous gift from the DJ&T Foundation, founded by Bob Barker. The foundation was one of our largest supporters early on, and the funds the organization provided allowed us to begin construction that facilitated the arrival of our first elephants to sanctuary.

The DJ&T Foundation has long lobbied to have elephants released from unhealthy captive environments and into sanctuaries. They have created and funded university programs that aid in animal education, and donate millions of dollars to various animal organizations around the world, helping them to fulfill their individual missions. Perhaps most famously, Mr. Barker is a longtime advocate of pet spay and neuter programs.

We commissioned and recently installed a plaque (pictured here with Bugsy) from Brazilian artist Adriano Figueiredo , and affixed it to a boulder just outside of the human gate for the female Asian barn.  You can see Yard 1 in the background of the photo.

This dedication is incredibly important to us at Global Sanctuary for Elephants because, not only is it symbolic of the generosity of the DJ&T Foundation itself, but also because it represents a significant moment in the beginning of this sanctuary’s life. Any young non-profit organization understands that without funding, you are little but a name. If we had not been granted the funding they provided, sanctuary and a life of healing for elephants in South America might still just be a dream. Because of the significance of the donation and of Bob Barker’s lifetime commitment to animal welfare, we are honored to dedicate the Bob Barker Center for Asian Elephant Care. 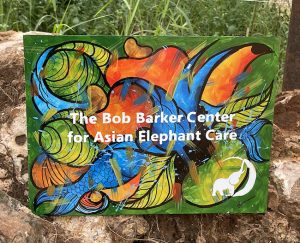 Your ticket for the: Dedication: The Bob Barker Center for Asian Elephant Care