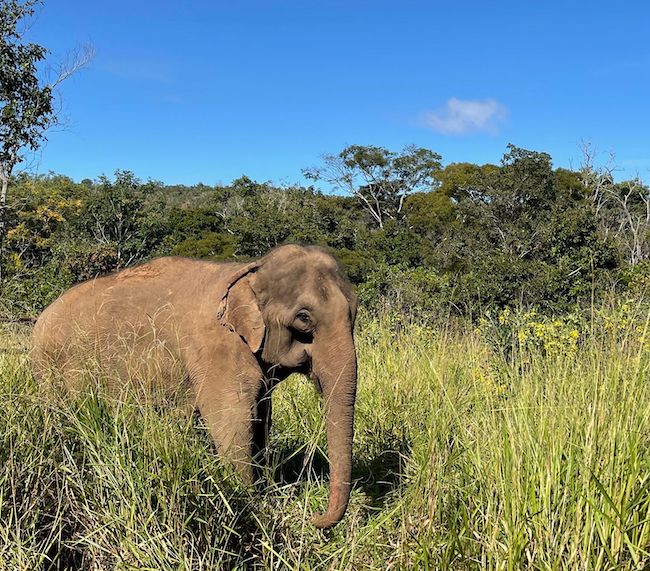 Elephants have demonstrated for hundreds of years how intelligent and emotionally empathic they are. In the wild, they have strong ties to one another and deep relationships that can last a lifetime. Those who are captured from their natural homes for a life in captivity lose those relationships that are crucial to their wellbeing and, sometimes, their survival. If a mother/infant connection is broken, that loss can affect elephants for the rest of their lives, preventing “normal” emotional development; lack of connection with older generations in a traditional herd damages the elephant’s ability to learn about themselves and makes them vulnerable to human exploitation.

As the world understands more about trauma, both in humans and other animals, studies have shown that elephants can suffer from post-traumatic stress syndrome. This might be as a result of the devastation of being torn away from their families, experiences with humans at a very early age, and/or abuse and fear-based training by their keepers. Some may become predisposed to violence and others may self harm or attempt to repress emotions. Elephants in captivity often become physically unhealthy as well, which can lead to even deeper trauma.

Lady unfortunately lived a life that impacted her severely, both physically and emotionally. After spending over 40 years in a circus and 6 more in a zoo, her body was in terrible condition. When she arrived, her spirit seemed broken. She distrusted both humans and other elephants. Though she may appear to an outsider as a loner, we have witnessed her grow and heal in so many ways, even though she will always suffer from the physical effects of captivity.

During a recent foot treatment (which Lady has learned to enjoy and appreciate), Kat placed a container of what we use to flush her feet after treatments close enough that Lady knocked it over with her trunk while reaching to smell it. Lady appeared to be mortified, as though she were waiting to be punished somehow. She displayed a response of concern that she was going to get “in trouble.” Of course Kat assured her that everything was fine, gently pet her trunk, and Lady relaxed right away. Though Lady has been at sanctuary for about two years and nothing bad has happened to her, deep down she still has a strong fear response. She may not always show this side of herself, but that instinct is still there and she may spend the rest of her life going through the process of healing.

Wellness is a complicated process for both humans and animals. When we witness an elephant’s growth and recognition of what sanctuary can be, we know they are in the process of healing. There is no instant fix for trauma, but the elephants here are on their own journeys toward a better understanding of themselves.

Your ticket for the: Decades Later, Trauma Lingers