Cold Weather is Moving In 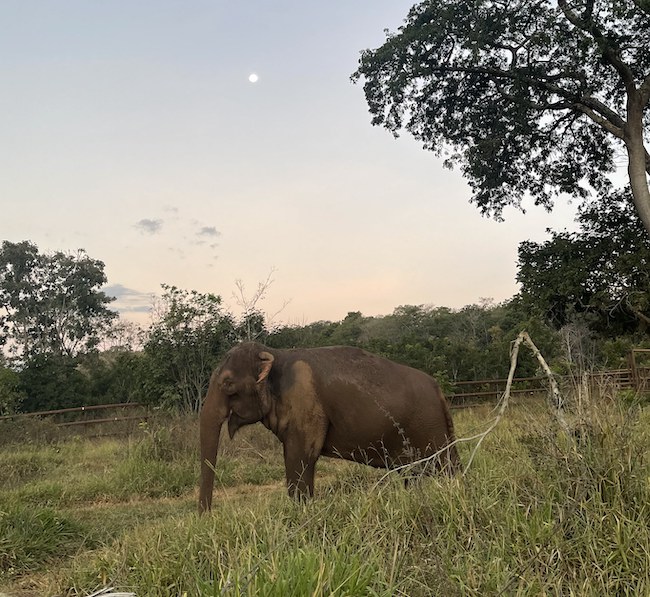 As we are moving later into the year, the weather has been starting to cool off a bit. Generally, we don’t have multiple cold days in a row; chilly days are usually followed by a cloudy morning and a warmer afternoon, when the sun comes out. The temperature rarely drops below 50 degrees F (10 degrees C), but we recently had two nights in a row that were that cool, which is a bit unusual.

When the sun comes out after a brisk evening, the elephants absorb its radiant heat and store it in their core, which helps keep them warm if there are multiple cool days in a row. After one of those particularly cold mornings, the sun didn’t make its appearance until much later in the day than anticipated – and it only stuck around for about 2-3 hours. That meant that the air was still fairly windy and cool, so the girls never got quite as toasty as they normally would.

The next morning was very sunny and bright, but still a bit on the colder side, so Scott went into the habitat early to get the girls some extra food and encourage them to get moving. Mara, Bambi, and Rana were sleeping deep in the bushes. On cold nights, they will find warm pockets in the habitat; there are usually some little compartments of air deeper in the brush that stays a bit warm, even on really chilly nights. It didn’t take much coaxing to get them into the sun, particularly because food was involved. All three seemed ready to warm up, but had bright looks on their faces.

Maia was in Yard 4 and Lady was in Yard 2, and the two of them both got some extra food – calories to warm them up – and seemed light and ready to go. It’s currently warming back up again. The weather is getting back to it’s normal routine and tomorrow we expect it to be back in the mid-80s F (30 degrees C). Everyone here (even the humans) will warm back up again in anticipation of another quick cold snap. And the cycle continues.

Your ticket for the: Cold Weather is Moving In

Cold Weather is Moving In