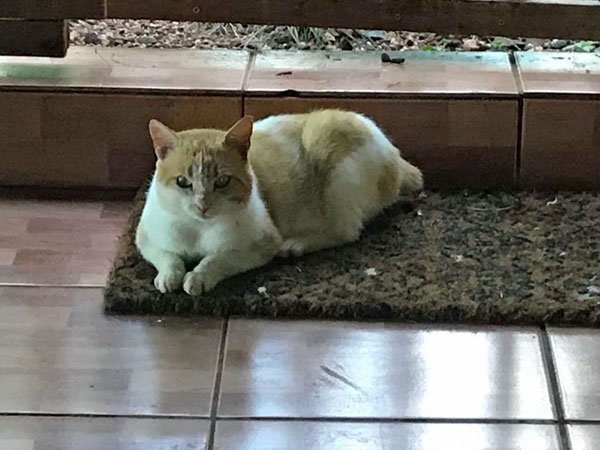 A little Clyde update. For those who saw the original post, Clyde was a stray that would show up at our house at night. He would hang out with our two cats before bed and get some food and be gone by the morning. One night we saw he had a significant tail injury, so we gave him a sedative, crated him and brought him to the vet in Cuiaba. He had his tail amputated, he was neutered and stayed in a large dog crate in the house for 10 days. The longer he was inside, the less he liked us, but we didn’t take it personally. He’s very strong-willed.

It has been two months since he went back outside and he is doing very well. As you can see, he only has a little nubbin of a tail, but he doesn’t seem to care. He started spending all day at the house, sleeping on the lawn with Bodhi (our male cat) during the day. Clyde is now at the house for every meal and has learned to hang out with everyone else while waiting for food to soak (we’ll post a photo in the comments section.) When we go for our 11 pm walk with Goomba (he is in a wheelchair, so we need to take him out), Clyde comes along with our other two cats and Bugsy as well.

Even though Clyde is now at the house all day, he still has no interest in us touching him. He will watch us pick up and pet our other two cats, and will walk right next to us, but doesn’t want affection. If you touch him, he hisses, lurches back and seems very offended. So we don’t try at this point, we give him the space he wants and the love and care he’ll accept. 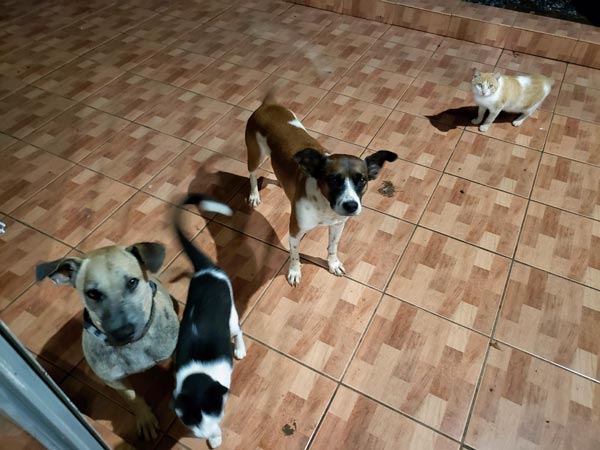 Most of our crew waiting for dinner to soak 🙂 Minus Molly who is lazy and doesn’t get up until things are ready, Goomba whose back legs don’t work, so he waits in bed and Saffy, who is actually there, but to the side of Bugsy you can’t see.

RELATED PAGE
The Cats, Dogs, and Others →

Your ticket for the: Clyde Kitty Update