Can’t Find the Three at Night 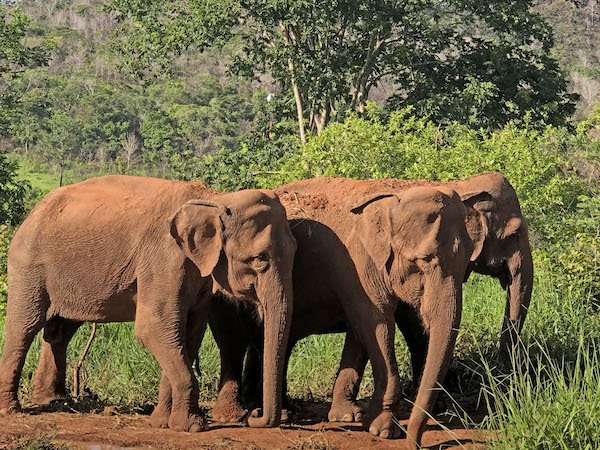 Lady was recently by the barn at night feed, and the others were nowhere to be seen. As Mara, Rana, and Bambi tend to show up at the barn at night, we called for them to see if anyone answered. Usually, Bambi will respond with her deep rumbles if they are near, which lets us know they are on their way.

Nobody answered that evening, so we got their evening meal together. When they still hadn’t shown up, we called again. Bambi rumbled in response, but it sounded far away, so we got on the four-wheelers and started looking for them. We would periodically stop, turn off the four-wheelers, listen, and call again. That night, there were no answering sounds once we started driving through the habitat. We stopped several times and, still, nobody responded. Kat and Scott were each on their own four-wheelers (with radios), so they split up. After more discussion and more exploration, we decided to venture out again in different directions and pretty quickly found them at the 4A trough.

Mara, Rana, and Bambi all had a party when we showed up. If only they had started the party earlier, we could’ve found them sooner!  Mara ate well, but because we were getting fresh produce the next morning, we had extra apples and carrots. We decided to scatter them in the yard so Rana and Bambi could walk around and look for them. We like to encourage foraging behavior because it’s good for them, mentally and physically.

As we started tossing food, Lady popped up on her side of the fence. We gave her hay earlier, but she had finished her hay and seemed to be checking to see what was happening on the Yard 4 side of their common fence.  Rana had already wandered off searching for random carrots and apples. Lady and Mara acknowledged each other through the fence. Lady showed up just in time, as we still had around 20 apples (1/3 of a bucket) left, which we distributed on Lady’s side of the fence. We also had a quarter of a pumpkin remaining, and pumpkin is one of Lady’s favorite foods – so she was pleased with that offering.

Everyone ended up hanging out pretty close together as we left. Lady doesn’t always choose to be around others, but she seemed to be in an engaging mood and was interested in being around them, which we are delighted to encourage. It’s even better when we can encourage it and give her pumpkin at the same time!

Photo of Bambi, Mara, and Rana (front to back).

Your ticket for the: Can’t Find the Three at Night

Can’t Find the Three at Night